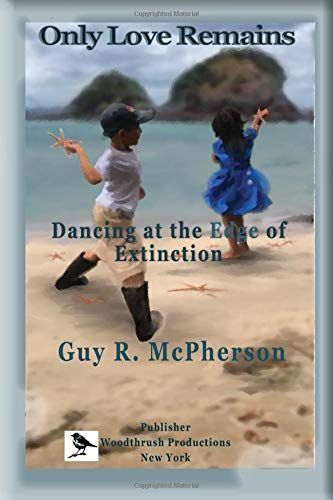 Only Love Remains
(Image by Guy R. McPherson)   Details   DMCA
Supreme Court Justice Antonin Scalia was mistaken: our U. S. Constitution was never intended to be a Biblical Rock of Gibraltar but more an exceptional evolution of enlightenment, reflecting and anticipating even more education through experimentation, a moonstruck tide of ever evolving humane humanity even revolutionary female ideas of equality.

So, Hillary Clinton is really our 45th - our first Russian president, Donald Trump and we, mesmerized by a white, White House show remain hitched to an Electoral College created by One Percenters fearing mob rule in 1776 which 243 years later, is a self-fulfilled prophecy hemorrhaging foreign investments and bloated by anti-American rallies from Charlottesville to, send her back.

Radically I submit, our U. S. Constitution, especially regarding presidential powers, Checks and Balances and the myth that only nine Justices does a Supreme Court make, needs to rise anew.

Yielding to Corporatism's media marketing us to buy into the over consumerism of deaf, dumb and blind, all we like sheep states of mind, we risk losing, Oh Beautiful.

Our 21st century radical truth reflects the stench of averted eyes, proving not even Bernie Sanders can successfully retrieve us, if relying on millions of Americans rising up to make it so not if we remain willing doormats to mutual bitterness and twisted lies sponsoring forever domestic and foreign wars though aided and abetted by Chief Justice William H. Rehnquist and his four conservative colleagues: Justices Sandra Day O'Connor, Antonin Scalia, Anthony M. Kennedy and Clarence Thomas on 9 December 2000.

Still even dust will rise, when shaken from bigoted, malice aforethought.

If absorbed into the universal lessons of moonlight's ebb and flow, our hopes rise with each new dawn, whether weather is blistering sunlight or clouds flooding us with real time forecasts predicting, America's reckoning is on the rise.

The potential to rise above the lies of maddening crowds is not in silencing them, but in self-revelation, breaking our silence: America is neither broke save in our lacking the unity to debunk, Trickle Down in Citizen's United repeal nor broken, apart from failing our Statue of Liberty promise.

Accepting, we are our brothers keepers and responsible for earth and all therein, our heads will be unbowed by the tyranny of Hedge Fund traitors, bankers corroding elected officials and the treason of exiling scientific thought, thinking banning learning will impede America's evolution to eyes resolutely forward and vision on the rise.

Radical Truth: some, like Americans still not into, a more perfect union, will never trust Democrats.

Choices: fixate on those who will never love all Americans as they claim to love America, or we unite with those who are involved with all life on earth particularly the lives of children who are even now exposed to our reckless elected buffoonery.

Trump's Acting Cabinet can shoot us with intentionally insensitive tyrannical words. Some authorities can cut us with their eyes until we too, can't breathe. Some racists may wound us with hatefulness, but as Charlton Heston, if not Moses, told Pharaoh Ramses - what happens next may have already come from our lips, for there are children alive today, even those who have school lunch money, who will have to live with the damage we have done to their expectation of safe food, air and water.

America's real power is in the global respect and love we regain. Therefore, neither we nor our Constitution need be enslaved, as were our predecessors, by a Justice Department opinion memo granting a sitting president, regal absolution from legal consequences.

Be not beset with gloom, for beyond Congressional Impeachment and indictment or Cabinet invoked 25th Amendment, We the People are the rising tide that lifts all boats and people in hope, to rise.

Radical assurance: not all voting for Trump/Pence are racist supremacists; not all Caucasians disdainful of people of color; Not all rapist are men and not all eager to crush life, like Trump allies, John Bolton, Stephen Miller, Jeffrey Epstein and George Nader. However, America's indulgences permeate the planet, and denial is not the cure but rather the disease upon which, like McConnell's indifference, the lives of children hang.

Character and honor demand, like air, we rise on the wings of reason to wisdom, knowing, America is our very next thought, assertion and embrace. Only we can save ourselves from those whose mission it is to program us with lies we tell ourselves about ourselves. Like Neil Armstrong, America's next one step, must be a, Liberal, giant leap for mankind.

Listen, and we will hear our immigrant ancestors reminding us, what we did to the least among us, we do to ourselves. America's future depends on the freedom of every child to breathe free the air of renewal so as life intended, all rise.