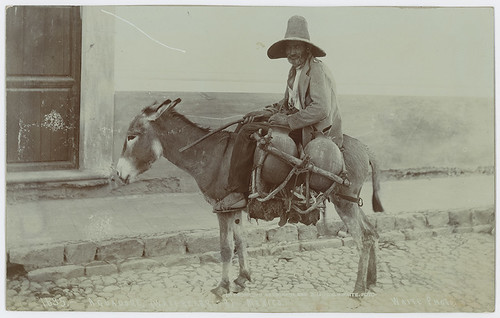 "If one were sitting astride "the wall" one would see a slowly plodding, age and use worn brindle burro coming along the ash grey powdered soil path, meandering in and out of patches of prickly pear and creosote. Of course, the burro would not be alone.

Mounted at the furthest point of safety, aft on the burro's rump, is a genuinely costumed local actor -- playing, simultaneously, the parts of a uniquely Coahuilan Don Quixote and a leaner, smaller, mix of Clint Eastwood's and Eli Wallach's characters in "The Good, The Bad and The Ugly." His hat, a torn, faded, ochre fedora, the brim painted top and bottom with gold automotive paint so as to maintain its stiffness, keeping it nicely vertical to protect the old gentleman from the unrelenting high desert sun.

He approaches on the immigrant detritus strewn path, slowly rolling on the burro's back, the hat's brim reflecting the sunlight, creating a random, geometric light show on the rusted metal uprights of "the wall." Don Quixote, astride Rocinante, the brass barber's basin atop his head, would have made the same light show on "the wall." The old fellow wears a ragged, woolen serape, torn and oiled Tommy Hilfiger blue jeans and battered heelless cowboy boots. He has fashioned stirrups from discarded stewed tomato cans. He isn't using them. They gently rattle as he plods along. He purposely put small stones in the stirrups to alert rattlesnakes of his passage.

His wife argued with him about most things. She ridiculed him for putting the small stones in his homemade stirrups. She scolded him for being so tonto, "Snakes don't have ears!" she said. She passed a number of years ago. He kept the stones in the stirrups and the stirrups on the burro mostly to remind him of her, even though he rarely used them.

Yes, if you happen to be atop "the wall" you see the old gentleman dismount the burro and walk towards "the wall", a green clothed Border Patrol agent hails him from the other side, "Buenas Abuelo, quiere cigarro?" he says. You see the old fellow reach through the slatted "the wall," take a cigarette, reach back through the slatted "the wall" and gently pat the Border Patrol agent on the forearm. Then you watch him slowly pass below you, smoking the cigarette as if it were an offering, possibly a prayer, one hand holding it, the other cupped around it so as not to lose too much of its essence to the wind.

Finally, the sun is directly above you. The brutality of it starts to make you nervous. You decide to climb down and return to your car. Just before you dismount, you see the old man place the spent cigarette in his pocket, bring his burro to a halt, slowly slide off the rear of the beast, walk up to the wall, his heelless boots leaving prints like a cobbler's form in the rapidly heating powdery soil, unzip his jeans and urinate on the hot, rusted steel, the steam from his issue rising up among the unconcerned slats of "the wall..." From "All Along "the wall" By Franklin Cincinnatus

Related Topic(s): Border Wall; Donald Trump; Immigration; Mexico; Story; Texas; Trump Border Wall, Add Tags
Add to My Group(s)
Go To Commenting
The views expressed herein are the sole responsibility of the author and do not necessarily reflect those of this website or its editors.