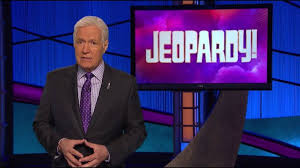 The death of the popular Jeopardy game-show host, Alex Trebek (pictured above), this past Sunday has inspired a Christian writer to write an article asking if Alex Trebek went to Heaven when he died. The Christian Bible-based answer the Christian arrived at is, probably not. The friendly, intelligent and kind Alex Trebek, based on the ungodly Christian Bible, is right now burning in Hell for eternity.

The author of the article, Jim Denison, Ph.D, works to build a bridge between popular culture and "biblical truths." Of course, biblical truths are as rare as honest politicians. As his article makes clear, he uses the fear that drips from the Bible in an attempt to convert people to Christianity.

Denison quotes from Trebek's autobiography, which shows Trebek held Pantheistic ideas about God, that God is in everyone and everything. This, of course, is not inline with the Christian Bible. Many, if not most, Christians believe a person must believe Jesus is the Son of God who died on a cross in order for us to be able to wash away our sins, including "original sin", which, according to Christianity, all babies are born with. If you don't believe that, then you go to Hell when you die. If you do believe that ungodly nonsense, then you go to Heaven when you die. Denison and the vast majority of faithful Christians do not realize that the ambiguous Bible is not even clear on the requirements of Christianity's biggest selling point, eternal salvation! Here's a list of 194 contradictions in the Christian Bible regarding requirements for salvation. The fact that these contradictions exist in the Bible makes it obvious that Thomas Paine was correct when he wrote in The Age of Reason, The Complete Edition, "In your letter of the twentieth of March, you give me several quotations from the Bible, which you call the Word of God, to show me that my opinions on religion are wrong, and I could give you as many, from the same book to show that yours are not right; consequently, then, the Bible decides nothing, because it decides any way, and every way, one chooses to make it."

The Christian clergy are enemies of what is true. This case of Alex Trebek, death and Christianity makes this fact obvious. What is true regarding death is that absolutely everyone dies. What is true regarding an afterlife, is that absolutely nobody knows what, if anything, happens when our body dies. It may be the total end of us. There may be a continuation of our consciousness of existence. Nobody knows. (Here's a link to our free Deism eBooklet Deism Destroys Fear of Death.) The reality of not knowing is due to the way our Designer designed the Universe and us. It is a guarantee that we have free will to decide if we believe in The Supreme Intelligence/God or not. And if our reason tells us that our Creator exists based on the intelligence-based beautiful Universe we are a living part of, it also allows us free will to love God or not. That gives us the opportunity to have true unconditional love of our Creator! If Christianity was true, none of us would be able to have unconditional love of God, as we would have to fear God, as Jesus taught people to do at Luke 12:5 when he taught, "But I will forewarn you whom ye shall fear: Fear him, which after he hath killed hath power to cast into hell; yea, I say unto you, Fear him." You can't love and fear someone or something simultaneously.

The Nobel Prize-winning scientist, Marie Curie, summed up a wonderful way to defeat fear. She wrote, "Nothing in life is to be feared, it is only to be understood. Now is the time to understand more, so that we may fear less." This beautiful, rational and profound principle of Marie Curie is part and parcel of Deism, while it is a principle that will eventually, once a large enough number of people are reached with it via Deism, bring down the fear-based "revealed" religions.

Bob Johnson is a paralegal and a freelance writer in Florida. He was raised Roman Catholic, but after reading Thomas Paine's The Age of Reason, he became a Deist. In 1993 he founded the World Union of Deists and in 1996 he launched the first web (more...)
Related Topic(s): Bible; Christianity; Death; Deism; Fear; God; Jesus; People; Reality; Religion; (more...) Truth; Truth, Add Tags  (less...)
Add to My Group(s)
Go To Commenting
The views expressed herein are the sole responsibility of the author and do not necessarily reflect those of this website or its editors.