The prominent investigative blogger Roger Shuler was arrested and beaten by Shelby County sheriff's deputies at his Alabama garage upon returning home Oct. 23.

Shuler faces a resisting arrest charge stemming from his refusal to obey a judge's order to stop writing adversely about Robert Riley Jr., an attorney who is part of Alabama's most prominent political family.

Shuler, shown in a jail photos with a swollen face from his beating, was being held on a $1,000 bond on his resisting charge. The judge has declined to set bond on two contempt of court charges, thereby enabling authorities to hold Shuler for an undetermined period that could be many months.

The Rileys and their political allies have denied Shuler's allegations.

Unknown persons have also created a website, Legal Schnauzer Exposed, to smear Shuler and his wife. Shuler is shown at left in a file photo outside his home with the family's pet dog, Murphy, who inspired the name of his blog.

Shuler's wife, Carol, told me her husband was beaten and arrested by four deputies in their garage about 6 p.m. after he returned home from his blogging at a public library.

She said she was home at the time, but heard nothing of the arrest and altercation at their attached garage until she became frantic with worry that someone had killed her husband based on his investigative reporting about law enforcement officials and their business allies.

According to her account: She called a former judge in another state whom she knew from her husband's reporting. Her helper used his law enforcement knowledge to ascertain that Roger had been arrested and jailed. Carol Shuler learned after midnight of her husband's whereabouts.

Carol Shuler told me the morning of Oct. 25 that she was she was barricaded in their home in Birmingham, worried about her own safety from deputies seeking to arrest her also on contempt of court charges.

"Roger's afraid he could be in there for months," Carol Shuler, left, told me by phone early Friday. "Meanwhile, I'm stuck in the house with no food, money or Internet. It's one thing if your husband is arrested. But another thing entirely if they're after you. I can't go anywhere." She is an Alabama native married in 1989. The childless couple has no close relatives nearby she feels she can call upon. Both she and her husband were fired several years ago from their jobs, and have claimed it was reprisal in each instance for his reporting about public affairs. 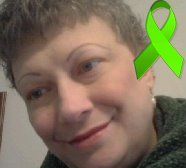 Roger Shuler's columns reporting judicial, prosecutorial and police misconduct across Alabama and the Deep South are often excerpted on the Justice Integrity Project and reprinted in full by OpEd News, Salon, FireDogLake, among other sites. The law enforcement actions against the Shulers threaten a major setback for the nation's increasingly timid news media.

The jailing was set in motion by Alabama Supreme Court Chief Justice Roy Moore. Moore became nationally famous in 2003 for ruling that his word and his respect for the Ten Commandments trumps U.S. Supreme Court law. Even admonishments of the state's ultra-conservative Attorney General at the time, William Pryor, Jr., failed to persuade Moore to remove a monument to the Ten Commandments from state property.

The Shuler prosecution illustrates how one-party governance in the Deep South inspired by Karl Rove and the Tea Party against the federal government has fostered a new view of the law. More precisely, it seems a return to old, autocratic views. Judges and their private sector allies increasingly believe they can create result-oriented law to be enforced with drastic penalties against reporters or anyone else.

As a political consultant, Rove helped change Alabama's Supreme Court from all-Democrat in the 1990s to all-Republican.

Related Topic(s): Arrest; Corruption; Don Siegelman; Prosecution; Reporters; Roger Shuler, Add Tags
Add to My Group(s)
Go To Commenting
The views expressed herein are the sole responsibility of the author and do not necessarily reflect those of this website or its editors.