Click Here to Remove All Ads
Source: The Guardian
The bizarre behavior by the media giant reflects brewing tensions as it seeks to enter the US television market 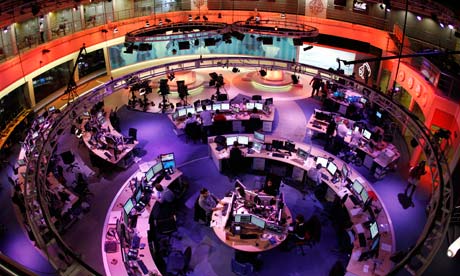 (Image by Unknown Owner)   Details   DMCA
A general view shows the newsroom at the headquarters of the Qatar-based Al Jazeera English-language channel in Doha in this February 7, 2011 Photograph: Fadi Al-Assaad/REUTERS

Last Tuesday, Al Jazeera English published a lengthy Op-Ed by Columbia professor and Middle East scholar Joseph Massad entitled "The Last of the Semites." Massad's argument was obviously controversial: he highlighted the shared goal between the early Zionist movement and Europe's anti-Jewish bigots (namely, the removal of Jews from the continent), detailed the cooperation between German Nazis and Zionists to facilitate the departure of Jews out of Europe (the existence of that cooperation is not in dispute, though the extent of it very much is), and highlighted the extensive disagreements among Jews themselves over the wisdom and justness of Zionism (large numbers of European Jews were insistent that they did not want to, and should not have to, leave their homelands for a distant land that was not theirs).

Predictably, numerous commentators -- largely the ones who have spent years casually smearing as anti-semites those who criticize Israel -- instantly and vehemently denounced Massad's arguments. The Atlantic's Jeffrey Goldberg sarcastically tweeted: "Congratulations, al Jazeera: You've just posted one of the most anti-Jewish screeds in recent memory," while the editor of the neocon journal Commentary, John Podhoretz, wrote: "Congratulations, donors to Columbia University, for paying this monstrous []head's salary!" A blogger for the Jerusalem Post claimed that "Massad's writings on Israel can easily be confused with material from the neo-Nazi 'White Pride World Wide' hate site Stormfront."

All of that is par for the course when it comes to debates over Israel and Palestine: as any writer who ever ventures into that topic well knows, nothing triggers greater venom and personalized attacks (and a greater risk of losing one's job) than opining on any of these matters. And the critics of Massad's Op-Ed were doing nothing wrong per se: it's perfectly appropriate to harshly criticize controversial arguments that are published in a major media outlet. An intense debate was triggered about Massad's thesis, just as Massad and his Al Jazeera editors undoubtedly anticipated, and that is what opinion journalism often does and should do.

Related Topic(s): Aljazeera; Comment; Palestinian; Transparency; Zionists, Add Tags
Add to My Group(s)
Go To Commenting
The views expressed herein are the sole responsibility of the author and do not necessarily reflect those of this website or its editors.