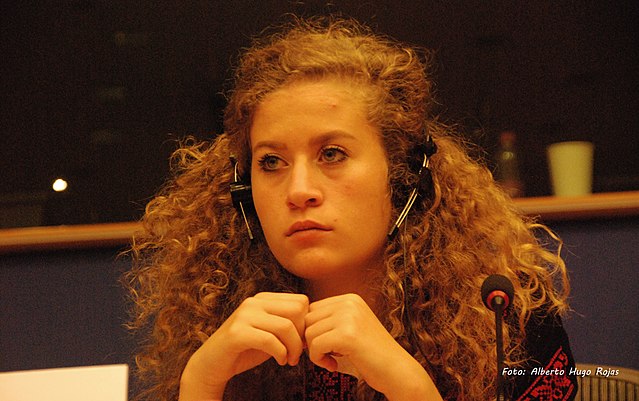 Ahed Tamimi (above)and her mother Nariman were released from an Israel prison Sunday. They had served dual eight-months sentences. Ahed, a 17-year-old teenager, left her cell and found a wild reception from friends, family and townspeople of her Nabi Saleh community.

Before her day of release ended, Ahed had held a press conference for the world's media, was welcomed home by Palestinian President Mahmoud Abbas, and laid a wreath at the grave of Palestine's first president, Yasir Arafat.

In her quiet, polished manner, Ahed also gave Israel what it dreaded, a heavy blow to its already-staggered public image of what is now a self-named Jewish state. She has become a symbol of both Israel's 70-year Occupation, and Palestine's future, by quietly serving her eight-month sentence for slapping an Israel soldier.

"Ashrawi said in a statement that 'Ahed and Nariman, both prominent Palestinian activists, were wrongfully and unjustly imprisoned by Israeli occupation forces in December. The motive for their vindictive arrest was political -- Ahed, who is underage and turned 17 behind prison bars, slapped an Israeli soldier who showed up with dozens of others to invade her family's home in Nabi Saleh, and Nariman filmed the incident.

"'Ahed and her humanity captured the imagination of many people around the world because of her spirit and refusal not to be intimidated by Israeli soldiers.' Ashrawi said that Ahed's story, and the stories of her courageous relatives, expose not just the 'immorality' but also the 'cowardly nature' of Israeli forces."

Mondoweiss describes Ahed's release from jail as an "incomplete freedom." She moves from one prison back to another, occupation. The slap that sent her to eight months in an Israel prison, was filmed. It went viral. Her mother "was imprisoned for live-streaming the incident on Facebook."

"The Israeli response was hysterical. Education Minister Naftali Bennett suggested that Ahed spend the rest of her life in prison, and 'centrist,' 'liberal' journalist Ben Caspit suggested that 'we should exact a price at some other opportunity, in the dark, without witnesses and cameras.' Lawmaker Oren Hazan (Likud) said that if it were him, he would 'put Ahed in hospital' by kicking her in the face, and author of the IDF 'ethics-code' Asa Kasher backed her continued imprisonment because she could, God forbid, slap again."

American academic and prolific writer, Juan Cole, delivered the news in his precise and colorful manner.

Cole wrote on his blog that Ahed and her mother, Nariman, served their "petty and mean-spirited sentences of 8 months [given them] by a colonial Israeli military judge presiding over stateless, occupied people who are intensively patrolled by the Israeli jackboot while their land, water, and well-being are gradually stolen from them by the judge's cousins."

"Tamimi, as a 17-year-old girl, slapped a couple of Israel Occupation personnel attempting to barge into her home. She and others had participated in a demonstration against Israelis squatting nearby on Palestinian land and encroaching on her home town, during which there was some stone throwing at the Israeli troops who came to stop people from protesting. Those troops shot her cousin in the head with a rubber bullet. That was when Ahed went out and slapped them.

Tamimi's press conference was covered by Kuwait's KUNA news service, which said in its report that "Tamimi used the experience of being jailed, as many colonial subjects in imperial detention cells have -- including Nelson Mandela and Mahatma Gandhi -- to her advantage."

Specifically, KUNA reported, "Tamimi finished high school in jail! She organized a study group of other young women, and she succeeded in completing the high school examination while imprisoned. She turned her dreary sentence, intended to deprive her of nearly a year of her youth, into an educational opportunity."

Related Topic(s): Ahed Tamimi; High School Examination; Israel; Mother; Prisoners Released; Resistance, Add Tags
Add to My Group(s)
Go To Commenting
The views expressed herein are the sole responsibility of the author and do not necessarily reflect those of this website or its editors.