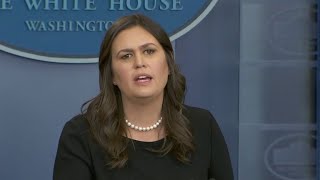 They lie about everything. And now we know that includes Attorney General William Barr, who brazenly lied about the contents of the Mueller report during a press conference held just hours before its release on Thursday. Apparently unconcerned that the obvious falsehoods he was peddling on Trump's behalf would be debunked within hours when the Mueller report was made public that day at 11 AM, Barr's completely dishonest re-imagining of Mueller's sprawling investigation ought to signal a long overdue turning point for the press. This ought to be the moment when journalists acknowledge to themselves, and possibly to the public, that Donald Trump's radical administration is incapable of being honest, about anything, ever.

The Trump White House's habitual lying isn't going to change. But it's long past time for the press to break its habit of believing administration utterances -- of treating its statements as remotely factual, even when it comes to extraordinary issues such as colluding with a foreign government and obstructing justice. I realize that's an extreme premise for the Beltway press to adopt, since it often prefers to cling to "Both Sides" journalism in order to prove it's not liberally biased and deflect allegations that it's out to "get" Trump.

But here's the bottom line: Barr embarrassed the press corps and made them look foolish when he issued a four-page press release in March supposedly summarizing Mueller's 448-page (!) report. Reporters and editors then ran with it, on the assumption that Barr was being honest and factual, which we now know was a huge mistake. "Mueller Finds No Trump-Russia Conspiracy," blared the GOP-friendly headlines, even though at the time not a single reporter had any idea what Mueller had found since nobody was allowed to read his report. Perhaps embarrassed by that fact, lots of journalists then spent days pretending they'd read the report and suggesting it was time for Democrats to move on.

The release of the Mueller report last week seemed to change something, at least momentarily, with the Beltway media's usual couched language giving away to more realistic -- and more stinging -- observations. "One takeaway throughout is how frequently White House aides lied to reporters," observed Washington Post reporter Philip Rucker, after reading Mueller's voluminous work. "Barr comes out of this looking rather ridiculous," added Sam Stein of the Daily Beast. "They're telling us there's nothing in this [report.] That's B.S. and they know it," noted CNN's Chris Cuomo, hours after the Mueller volume was released.

Related Topic(s): Attorney General William Barr; Hoax; Mueller Investigation; Presstitutes; Trump Crime; Trump Liar, Add Tags
Add to My Group(s)
Go To Commenting
The views expressed herein are the sole responsibility of the author and do not necessarily reflect those of this website or its editors.