The best part of State of the Union night was the rejection of Trump's bullying, and the outlining by Donna Edwards of an alternative vision. 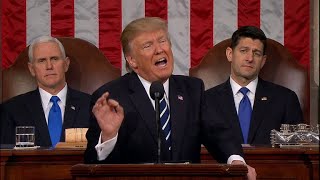 Donald Trump delivered his first State of the Union address 136 years to the day after the birth of the ablest of his predecessors, Franklin Delano Roosevelt.

Roosevelt delivered epic State of the Union addresses that called a nation to overcome a depression and defeat fascism.

Trump delivered a speech that will be forgotten by next week.

Roosevelt's State of the Union addresses outlined aspirations that inspire us to this day, especially the 1944 speech in which he proposed a "Second Bill of Rights" to guarantee fair wages, health care, education, "adequate protection from the economic fears of old age, sickness, accident, and unemployment," and "freedom from unfair competition and domination by monopolies at home or abroad."

"We have come to a clear realization of the fact that true individual freedom cannot exist without economic security and independence. Necessitous men are not free men. People who are hungry and out of a job are the stuff of which dictatorships are made," Roosevelt told the Congress. "In our day these economic truths have become accepted as self-evident. We have accepted, so to speak, a second Bill of Rights under which a new basis of security and prosperity can be established for all regardless of station, race, or creed."

Unfortunately, Trump does not accept these economic truths as self-evident. The entire focus of his administration has been to undo the New Deal, the Fair Deal, and Great Society progress of the past 85 years.

Trump said as much in a State of the Union address that was long on self-congratulation and short on vision. Even Trump's oft-discussed $1.5 trillion infrastructure plan was discussed anew, but with few new details. It took a savvy senator to speak the truth: "Trump's infrastructure plan is designed to encourage new #TrumpTolls in order to line pockets on Wall Street," tweeted Senator Jeff Merkley (D-OR). "We need a plan that puts middle class jobs and the needs of our communities ahead of his developer friends."

Related Topic(s): Heartless; Immigrants; Inequality; Racism; State Of The Union Speech; Trump Insults, Add Tags
Add to My Group(s)
Go To Commenting
The views expressed herein are the sole responsibility of the author and do not necessarily reflect those of this website or its editors.