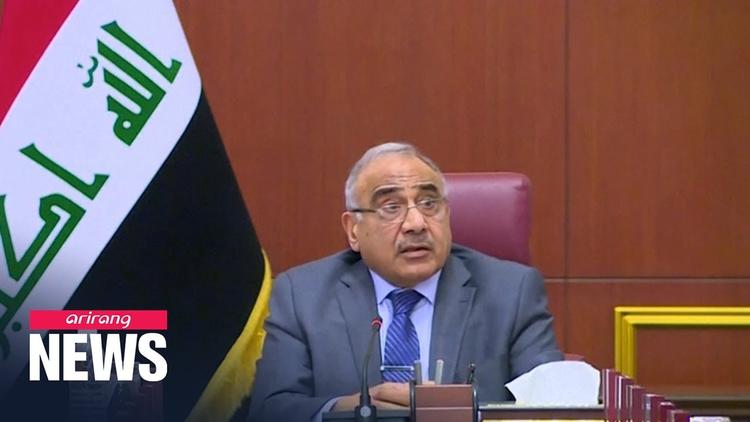 Euronews Arabic reports that the Trump administration's strike on three bases of the Kata'ib Hizbullah in Iraq and two in Syria has provoked widespread fury among politicians, students and the public.

Outgoing Iraqi Prime Minister Adil Abdulmahdi said Monday that he had attempted to dissuade the Trump administration from the bombing raids, about which he was informed only hours before they were launched, but had failed. His helplessness in the face of Trump demonstrated to many Iraqis that the US still has a colonial relationship with the country.

The Iraqi government of Abdulmahdi said that it is "reviewing its relationship" with the US in the wake of the American attacks. The Baghdad government said in a statement, "This sinful attack violates the goals and the principles for the sake of which the international coalition was formed, and impels Iraq to review its relationships and its frameworks for action and its policies and laws so as to safeguard the sovereignty and security of the country, protecting the lives of its children and promoting common interests."

Iraq's Cabinet-level National Security Council met and expressed alarm that the country was getting caught in the crossfire of other nations' struggles, which has the potential to inflict extreme danger and great losses on Iraq. (The US strikes were depicted by Secretary of Defense Mark Esper as against Iran-backed militias). The security council said that the unilateral American action, taken without the agreement of the Iraqi government, put all military bases in the country in danger, including American ones. It complained that the US struck precisely those forces guarding the Iraqi border with Syria from the remnants of the terrorist ISIL (ISIS) organization, thus exposing the security and sovereignty of Iraq to danger and threatened the security of everyone. Many of those killed or wounded, it said, had been heroes in the defeat of ISIL.

The US strikes killed 25 persons and injured 51, including fighters and commanders. The number of wounded is expected to rise as after-incident appraisals are made. Kata'ib Hizbullah is one of the Popular Mobilization Units that helped defeat the hyper-Sunni ISIL terrorist state. The Trump administration maintains that it is responsible for rocket and mortar attacks on sites where the some 5,000 US troops in Iraq are based.

Protest street crowds in Baghdad denounced the airstrikes as violations of Iraqi sovereignty, saying that they reject all sorts of foreign intervention in their country, from any quarter. In Basra, crowds chanted, "No America, no Iran!" Euronews interviewed students at Basra University who said that the university students universally condemned the American injury to Iraqi sovereignty.

The Kata'ib Hizbullah militia demanded the immediate withdrawal of "the US enemy" from Iraq. The League of the Righteous (Asa'ib Ahl al-Haqq), another hard line, Iran-backed Shiite militia, joined in the call for an American withdrawal, saying in a communique, "the American military presence has become a burden on the Iraqi state and the source of a threat to our forces. It is therefore incumbent on all of us to expend our utmost effort to expel them by every legitimate means." The Badr Corps, the paramilitary of the Islamic Supreme Council of Iraq, echoed these sentiments, Euronews said.

These Shiite militias double as political parties, and form part of the Fath parliamentary block with 45 members of parliament. Fath is headed up by Hadi al-Amiri, who also leads the Badr Corps. Fath said in its communique, "The brazen attack by the American forces on security forces, targeting the 45th and 46th brigades of the Popular Mobilization Units in Qa'im is an attack on national sovereignty and on Iraqi honor, which rejects any violation of it." It added, "This arrogant and criminal act will be met with an Iraqi response that is prepared to take on any challenge touching upon its dignity and sovereignty." Fath's statement continued, "we call upon national forces and political blocs in parliament take an urgent and bold decision to demand that the government expel all foreign forces from Iraqi soil -- those forces that have become a dagger in the side of the nation."

Related Topic(s): Bombing; Iraq; Iraqi Government; Iraqis, Add Tags
Add to My Group(s)
Go To Commenting
The views expressed herein are the sole responsibility of the author and do not necessarily reflect those of this website or its editors.