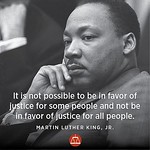 Sometime during the next twenty-five years, as the United States slowly begins to lose economic, political, cultural and communications hegemony over the rest of the world, a much nicer, peaceful, pleasant, prosperous, free and expressively energetic America will begin to take shape. The business-above-humanity rulers of the nation finding themselves in a multipolar world led by an eminently successful China (earlier for two thousand years the world's most culturally and materially advanced civilization), will gradually permit the racism no longer useful to them to dissipate. Americans will then be free to join majority Humankind in emulating the affection prevalent in the happier societies of planet Earth. [see China Rising - Capitalist Roads Socialist Destinations By Jeff J Brown, 2016]

Within African American communities a relaxed grace, charm, nobility, joy in fellowship, brother-and-sisterly general enjoy life feeling has always prevailed, most likely for a protective isolation from the white Anglo-Saxon society that once enslaved them, an up-tight society of travail, divisiveness, aggressiveness, unkind competitiveness, loneliness, and stiffness in social contact. It therefore seems to this archival research peoples historian that the predicted future America will trend toward seeking the unity, harmony and enjoyment found in its African American communities. After all, in the long run, what produces happiness is what all sane people seek. Even today, it is increasingly African American celebrities who are bringing the most happiness to all Americans. The sounds of Black entertainers, musicians, both singers and instrumentalists, the charming smiles of graceful in movement Black football and basketball players, fill our TV screens, and increasingly it is Black comedians, who are making America and the world laugh as they project their own contagious relaxed happiness.

How strange then is the fact that the African American community is, and has been, either openly or indifferently, supportive of white racist regime change imperialist bombings, invasions and bloody occupations in smaller nations of people of color. [Civil Rights Leaders, Progressives, Family, Will Again Betray Martin Luther King on His Birthday, 1/13/2015, OpEdNews]

One reason must be that most African Americans, especially those under sixty, have never heard that Martin Luther King called them "atrocity wars and covert violence on three continents since 1945 to maintain unjust predatory investment in countries overseas," and never heard that King had angrily castigated his government for "taking the black young men who had been crippled by our society and sending them eight thousand miles away to kill and diein extraordinarily high proportions relative to the rest of the population."[1][2]

While their government insanely takes millions of non-white people's lives overseas, America's beloved Black celebrities, shirking their role model responsibly either out caution or lack of interest, have cooperated by their silence with an insidiouscriminal mainstream media half century total blackout of Martin Luther King's anguished cries,"The greatest purveyor of violence in the world is my own government" and "Silence is betrayal," outcries that in 1967, shook the world and made headlines in bold capital letters on every major newspaper's front page the morning after Rev. King in anguish, held his fellow Americans, and himself, responsible for continuous horrific death and destructionin poorer countriesfor "refusing to give up the privileges and pleasures that come from the immense profits of overseas investments." [2] (The imperialist mainstream media that today obsequiously hails King as a saintly patriotic American alongside of America's first Black president, vilified King as a traitor until he was silenced one year later in a pool of blood. [3])

What else could one imagine contributing more to African American support for regime change death and destruction and Black celebrity silence, than the continual betrayal of Martin Luther King by his closest friends, leaders of the civil rights movement who have all gone on to political careers as officials within the very genocide producing government King condemned and thereby earned a bullet to his brain for having threatened the profitability of trillions of dollars invested in the conquering of Vietnam and other small nations seeking independence. [4]

Lastly, the most important reason why so many African Americans support U.S. genocidal military action among colored peoples overseas, (even though thousands more Black GIs have been killed fighting for white supremacy overseas than African Americans in the streets of U.S. cities [5]), has to be that TV programing of deceit, indulgence, fear, simple minded fake news and false patriotism that has sold the dozens of genocidal US bombings, invasions and occupations in poorer non-white populated nations as a heroic defense of America.

Related Topic(s): Martin Luther King, Add Tags
Add to My Group(s)
Go To Commenting
The views expressed herein are the sole responsibility of the author and do not necessarily reflect those of this website or its editors.