Afghanistan Pakistan relations are set to nose dive once again, and it is no reason for India to celebrate, though New Delhi has just ducked for cover after news appeared that an Indian Muslim turned ISIS terrorist was among the suicide attackers who had stormed a Kabul shrine last month. 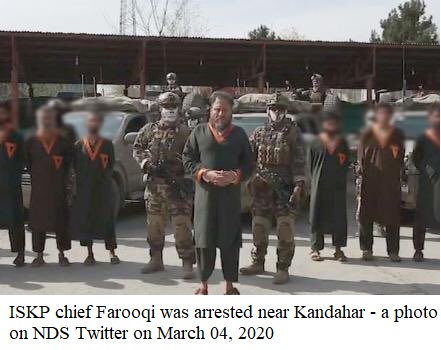 ISKP chief Farooqi was arrested near Kandahar
(Image by photo released by Afghan spy agency NSD on its twitter handle)   Details   DMCA
This prognosis is a sequel to a development that took place on Saturday, 4 April. National Directorate of Security (NDS) of Afghanistan has found a link between Pakistan and the 25 March suicide attack on a Sikh shrine, Gurdwara Har Rai Sahib in Kabul. A key member of the outfit that carried the attack, Asalam Farooqi, and 19 of his associates - one of them "military" head have been arrested in the southern province of Kandahar, NDS said in a statement.

ISIS international face, Abu Bakr al-Baghdadi, was eliminated last October by the US Special Operations Forces in a daring night raid in north western Syria. Farooqi's international baptism took place in Syria in 2015. About it a little while late.

Not many details of the Operation that netted Farooqi are independently available. But from what the Afghans say, the Op exposed Pakistan's Mata Hari role on the Kabul scene.

Margaretha Geertruida Zelle, better known as Mata Hari, was a World War I vintage dancer- spy. She worked for the French and the Germans. When the cover was blown, a French firing squad executed her on 15 October 1917 even as she "defiantly blew a kiss" to them, according to eye-witness accounts.

The Farooqi arrest is indeed bad news for Pakistan. He has links with terrorist groups which have been providing the much needed deniability cover to the Pakistani agencies who handle them. It is this linkage that makes Pakistan the modern day Mata Hari since it has also been working shoulder to-shoulder with the United States for a peace deal with the Taliban and thus facilitate the withdrawal of American forces from the war ravaged country.

Aslam Farooqi is no small prize catch. He is ISIS-K emir (supremo), and by virtue of that position, he is the shadow "Governor of Khorasan".

In so far his Pakistani credentials are concerned, he belongs to the Mamozai tribe and hails from Orakzai tribal agency. He worked with the Lashkar-e-Taiba, (LeT), before graduating to Daesh' military wing. He joined the Lashkar in 2004.

After a stint in Peshawar at the head of Daesh storm troopers, he moved to Eastern Afghanistan to lead the 'troops' in Abdul Khel valley of Achin district of Nangarhar province. Simply put, Farooqi's arrest puts focus on ISKP's Pakistan connections.

He succeeded Mawlawi Zia-ul-Haq aka Abu Omar Khorasani as ISKP chief in April 2019. Zia was sacked for his 'poor' performance, say local reports. Within the murky Af-Pak Jihadi world, Farooqi has an edge over others. He is an Afridi Pashtun and leads mainly Pashtun faction; so he is acceptable to both Afghan Taliban and the Haqqani Network, who are Pashtuns and pro-Pak.

According to Antonio Giustozzi, a respected voice on jihad, "Farooqi was sent to Syria in 2015 from Afghanistan along with a batch of 167 LeT fighters. He joined the IS before returning to Pakistan in 2016", the visiting Professor at King's College, London, is quoted as saying in his book, "The Islamic State in Khorasan Afghanistan, Pakistan and the new Central Asian Jihad".

Giustozzi attributes the ISKP decision to elevate Farooqi to Pakistan's ISI. ""possibly as a trade-off appointment of a leader linked to the ISI and the cessation of attacks against Pakistani government targets, in return for access to safe havens in Pakistan."

As Farooqi's progress shows, ISKP draws its cadres from a host of terrorist groups operating from Pakistan and Afghanistan soils. He enjoys goodwill with all of them. ISKP either executes or quickly claims responsibility for 'other's' actions Taliban's, Haqqani's and LeT's including. Like the Taliban and LeT, the Haqqani Network, particularly its supremo, Sirajuddin has very close links to the ISI.

Undauntedly, Afghan and American agencies will spend long hours to know Farooqi's mind. The interrogators will be working overtime with two other catches - Qari Zahid and Saifullah, who were arrested during what NDS termed as "targeted and sophisticated operation by special security forces". While Qari was in charge of ISKP's military, Saifullah looked after recruitment.

management consultant by profession I live in Boston and frequent Asia and Far East on business trips. Like most of my ilk, I am also a blogger and hit the blogspace at irregular intervals though. My subjects of interest are wide ranging from (more...)
Related Topic(s): Afghanistan Drawdown; Afghanistan War; Daesh; Expose; Haqqanis; Lashkar-e-Taiba; Taliban, Add Tags
Add to My Group(s)
Go To Commenting
The views expressed herein are the sole responsibility of the author and do not necessarily reflect those of this website or its editors.