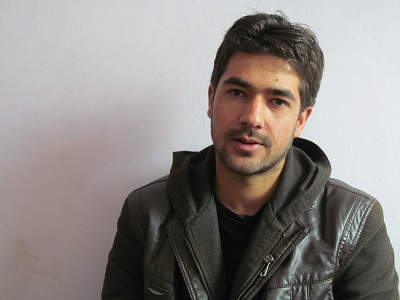 (Below is a transcript of an interview with Raz Mohammad, an Afghan Peace Volunteer, with questions prepared by Maya Evans of Voices for Creative Non Nonviolence UK.)

Kathy Kelly: Raz Mohmmad, what do you think about drones?

Raz Mohammad: I think drones are not good. I remember how, in my village, a drone attack killed my brother-in-law and four of his friends. It was truly sad. A beautiful life was buried and the sound of crying and sorrow arose from peaceful homes. I say that this is inhumane. Today, the idea of humanity has been forgotten. Why do we spend money like this? Why don't we use an alternative way? The international community says that drones are used to kill the Taliban. This is not true. We should see the truth. Today, it's hard to find the truth and no one listens to the people.

Raz Mohammad: Drones have a negative impact on the lives of the people of Wardak and other provinces in Afghanistan, because drones don't bring peace. They kill human beings. Drones bring nothing but bombs. They burn the lives of the people. People can't move around freely. In the nights, people are afraid. Drones don't improve people's lives, they limit the people's lives. The people are not happy with drones. When they hear the sound of drones, they feel sad. Those who live in Kabul and those who live in the provinces especially in Pashtun areas feel differently about drones.  Those in Kabul don't feel the pain of those in the provinces where there's war and family members are being killed. It is those families of victims who should be asked and whose voices should be heard.

Kathy Kelly: Is there a mental impact on Afghans from the presence of drones?

Raz Mohammad: Yes, drones have a negative impact on the mind. For me, when I go home, I recall the incident with my brother-in-law which affected me a lot and changed my life. I don't have a peaceful mind. When I'm home and study at night, my father & mother are very worried and tell me not to stay up too late because they may make a mistake and bomb the house. When my younger brother knows of a drone incident, he says he won't go to school or get out of bed early today because the drones may come.  See, how it affects the mind of a 5 or 8 year old child.

Kathy Kelly: What do you think about the use of drones after the 2014 withdrawal?

Raz Mohammad: I think that the use of drones today or in 2014 is inappropriate. Why has the international community sent drones to wage war in Afghanistan? Why have we forgotten the concepts of humanity and the love of humanity? War is not a solution. We can see this from the past 30 years of war in Afghanistan. Wars bring killing and enmity. Drones after 2014 will cause enmity between Pashtuns, Tajiks and Hazaras because those in government use the people for their own benefit. For their own power and lives, they drop bombs on the people, and bring division and inhumanity. As I see it now and after 2014, innocent human beings will be killed.

Kathy Kelly: Do you have any other message to give?

Raz Mohammad: My message to the ordinary people of the world is to listen, and become aware of drone warfare because what international governments say about using drones to kill terrorists is not true. Friends who come here can see that innocent people and women are killed. We should listen to the voices of Afghans and promote and defend humanity and humane relations. My message to the governments of the world is : Why have you forgotten humanity and the love of humanity? You are killing human beings for your own monetary benefit. I demand that this (drone warfare) be stopped, especially the spending of so much money on drones in Afghanistan and the killing of so many innocent people. Isn't it appropriate for you to help the people in alternative ways? We are human beings and are always your friends, thank you.

Related Topic(s): Afghanistan War; Drone Wars; Killing; Peace Activism, Add Tags
Add to My Group(s)
Go To Commenting
The views expressed herein are the sole responsibility of the author and do not necessarily reflect those of this website or its editors.