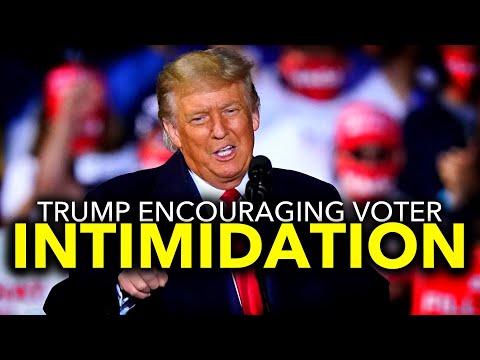 Trump is Encouraging His Supporters to Intimidate Voters--And They're Listening
(Image by YouTube, Channel: The Humanist Report)   Details   DMCA

For weeks police and private intelligence circles have predicted "coming violence" from right-wing vigilantes at some polling places in presidential battleground states. But President Trump's debate message to a white power group to "stand back and stand by," despite his retraction, has turned online chatter among extremists into organizing actions targeting Election Day, according to the FBI's former counterintelligence director Frank Figliuzzi.

"What we are seeing include calls for civil war, race-based conflict, and for increased acquisition of weapons," said Figliuzzi, speaking at an October 2 briefing by the Lawyers' Committee for Civil Rights Under Law on voter intimidation threats and responses. "Right-wing extremist groups, including QAnon, Proud Boys, Boogaloo Boys and violent militia groups, are all using the language of violent conflict in both their public and in their private communications online."

"They are also calling for a physical response and presence at the polling places," he said. "The specter of people who are violent in nature and have violent agendas, and often come armed with long guns, is becoming a very real possibility."

The Lawyers' Committee briefing suggested that recent incidents where Trump supporters have badgered voters and election officials in blue epicenters may be signs of bigger trouble as Election Day nears. Both parties have stepped up recruitment of partisan poll watchers and, in Trump's case, voting vigilantes.

While the committee's briefing emphasized there were laws protecting voters from last-minute electioneering and intimidation, as well as rules that regulate what partisan observers can and cannot do at election sites, its message was that public officials must speak out more forcefully to reject voter intimidation at polls or in the streets, and say how authorities would respond should it occur.

"One step that election officials can make is to make clear the campaign-free zone that applies in their states," Kristen Clarke, the Lawyers' Committee president and executive director, said, referring to the buffer zone that surrounds polling places or buildings with voting sites inside, where supporters of candidates and causes cannot campaign. "In every state there is a certain perimeter in which electioneering activity is prohibited, and [in] which intimidating activity would also be prohibited."

"Officials often do a good job promoting the time and date for elections, and what's on the ballot," Clarke said, referring to the public information campaigns that have increased since Labor Day. "Going one step further to make clear that no intimidation is allowed within a certain zone outside the doors of a polling site would be one small step."

Local and state prosecutors should take strong stances condemning any menacing presence at polls, she added, especially since the U.S. Department of Justice has abdicated that role under Trump. "This may be a moment where we lean on state and local law enforcement to step into those gaps."

"There is also a tremendous role to play for law enforcement leaders in terms of messaging," agreed Kenneth Polite, former U.S. attorney for the Eastern District of Louisiana, speaking at the same briefing. His recommendation included "making public statements that emphasize" their commitment to protecting these constitutional rights, including their roles of protecting [against], evaluating and prosecuting this type of intimidation."

The week after the Lawyers' Committee briefing saw some officials beginning to speak out. On October 6, the attorneys general of Michigan, Wisconsin and Nevada, all Democrats, held a video press conference where they condemned Trump's call for unofficial poll watchers and vowed to prosecute voter intimidation. Other recent news reports have noted that local election administrators and police have been reevaluating their security plans.

Not a Normal Election

There were many reasons behind today's worries about voter intimidation that set 2020 apart from threats of election violence in the recent past, the committee's experts said. Foremost was Trump's role as an "instigator or radicalizer" with his attacks on the voting process and calls for supporters to confront what Trump said would be cheating by Democrats. Another factor was in 2018 the Republican National Committee was freed from a decades-old federal consent decree that barred it from using voter suppression tactics. And another was scenes from Midwestern states where right-wing zealots brought military-style guns into statehouses while protesting government-ordered COVID-19 precautions.

The most likely targets for voter intimidation were not polling places randomly chosen from the 100,000-plus voting sites that will be open on Election Day, November 3, the experts said. The targets would likely be polling places in communities of color in swing states, they said, especially in locales where anti-police brutality protests and Black Lives Matter rallies have occurred.

The fact that these settings have residents who distrust the police adds a complicating layer when it comes to how authorities will intervene should legal electioneering cross the line into illegal voter intimidation, disturbing the peace or criminal violence. Police have more authority than election officials to respond if threatening behavior or violence arises at polls or in the streets, but many voters in communities of color don't want to ask the police for help -- or believe that the police will protect them -- voting rights advocates said.

"It's one thing to say we need folks [waiting to vote] to be tougher. It's another thing to say, 'Who is going to protect you?'" said Jorge Vasquez Jr., Power and Democracy Program director for the nonprofit civil rights law firm Advancement Project. "[If] you're a Black or a Brown voter, and you see how Black or Brown people are being treated by law enforcement, you would understand that you're really talking about [a situation in which your]... life may be on the line in a way that it hasn't been in the past."

Steven Rosenfeld  covers democracy issues for AlterNet. He is a longtime print and broadcast journalist and has reported for National Public Radio, Monitor Radio, Marketplace,  TomPaine.com  and many newspapers. (more...)
Related Topic(s): Intimidation; Trump; Violence And Abuse; Vote Suppression; Voter Disenfranchisement; Voter Fraud; Voter Participation; Voting, Add Tags
Add to My Group(s)
Go To Commenting
The views expressed herein are the sole responsibility of the author and do not necessarily reflect those of this website or its editors.