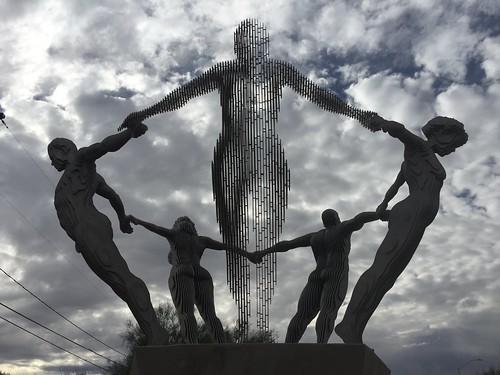 Unity 2
(Image by HockeyholicAZ)   Details   DMCA
"To overcome these challenges - to restore the soul and to secure the future of America - requires more than words. It requires that most elusive of things in a democracy: Unity. Unity."
- Joe Biden

Like our newest president, Barack Obama came into office promising to bridge the partisan divide. His outstretched hand was slapped back by an opposing party that was obsessed with making him a one-term president. Still, Obama ignored his overwhelming majority in the Senate and crafted a stimulus bill that jettisoned the money for infrastructure projects that he preferred and replaced them with the tax cuts that Republicans demanded. For his efforts, not a single Republican voted for the package. Americans paid the price as the final result was much too small and caused a shallow recovery.

Not having learned his lesson, Obama spent months trying to craft a bipartisan health care reform bill. What started as a plan for universal health care devolved into a plan that included elements crafted by The Heritage Foundation, a right-wing think tank. Even with these compromises, Obamacare was passed without any Republican votes. While this plan did not provide health care for all Americans, it did add millions to the ranks of those having health insurance. Still, the Republicans have taken dozens of votes in an attempt to repeal it.

Once the Republican party took control of the legislative branch they entrenched even further. Compromising was impossible, they wanted capitulation. Forgoing the opportunity to appoint a liberal to a vacant seat on the Supreme Court, Obama nominated Merrick Garland, a proven judicial moderate. Mitch McConnell did not even allow the nomination to be considered, leaving the vacancy available for Trump to fill with a right-wing justice.

Biden enters the White House with an opposition party that is more hostile than the one Obama faced. It took weeks for most Republican legislators to acknowledge Biden's victory as they rallied around Trump's "Big Lie" that the election had been stolen. Even after a violent mob stormed the capital killing a policeman and threatening to murder Vice President Pence, 147 Republicans voted to overturn the election results and disenfranchise the voters in two states. A party that refuses to accept its own defeat seems unlikely to accept a hand extended in the spirit of unity. Like Scar at the end of The Lion King or Gaston at the conclusion of Beauty and the Beast, Republicans are much more likely to take advantage of an outstretched hand in one last desperate attempt at victory.

The concept of compromise is foreign to the GOP's leadership. They, therefore, interpret Biden's promise to unify the country as a willingness to cave in to their demands. Instead of treating Trump's historic second impeachment as a chance for truth and reconciliation, they demand that Democrats ignore the constitutional requirements that the legislative branch provide checks and balances to the executive branch. Despite their use of budget reconciliation to push through tax cuts for their corporate benefactors, Republicans insist that using this process to pass COVID relief is a violation of Biden's vow of unity.

How many times will Democrats allow the opposing party to pull the football away before they realize that they are never going to be given a fair shot at kicking the ball? In order to successfully negotiate, you have to do so from a position of strength. For Democrats to do that, Republicans must know that if negotiations fail their opponents will go it alone and it will not look anything like the compromise that was being negotiated.

Though it sounds counterintuitive, calling the Republican bluff and pushing COVID relief quickly through the reconciliation process could actually be an essential step towards unifying the country. While Congress is divided along political lines on the need to provide this relief, the people are a lot more in alignment. According to a recent survey, 83% of Americans approve of Congress passing a new economic relief package. While Republicans in Congress are insisting on a smaller package, this is a view shared by only 20% of Americans. In fact, 40% want a plan with more relief. Using any method possible to pass a much-needed relief plan that is approved by the American people is a giant step towards unifying for the benefit of the country.

Presented with a plan that has the broad support of the American people, Republicans would be forced to with a very tough choice. Knowing that their attempts to repeal Obamacare had led to devastating losses in the 2018 midterm elections, would Republicans be willing to take their chances by voting against a popular relief plan? Unless the GOP is willing to risk other red states joining Georgia and Arizona in turning blue, Biden just might get the unifying vote he craves.
________________________________

Related Topic(s): Corona Virus Covid 19 Relief Funding, Add Tags
Add to My Group(s)
Go To Commenting
The views expressed herein are the sole responsibility of the author and do not necessarily reflect those of this website or its editors.