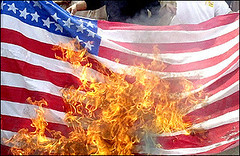 What does it mean to free this continent from Americanism? It doesn't just mean abolishing the United States government, as all who've seriously studied revolutionary socialist theory intuitively recognize to be necessary for establishing socialism here. It means returning full jurisdiction over all of the stolen Native lands to the 562 indigenous First Nations that exist within U.S. borders, allowing these nations to develop towards socialism as they choose. This part of decolonial theory is not something that's intuitively recognized as necessary by all socialists, especially not white socialists who live within the U.S.

To see why this vision for full tribal independence is essential, just look at the model for national liberation that the indigenous people of Hawaii have embraced in response to the colonial contradictions that they're confronted with. Since all of the indigenous nations under the occupation of the U.S., Canada, and the other settler-colonial states face the same contradictions, Hawaii's route towards freedom is one and the same with these nations. At the 1985 conference on Hawaiian sovereignty, Huanani-Kay Trask described this path:

I am a member of the movement for Hawaiian independence, and I am here to discuss the liberation of my people. How can we show our people that they cannot be both American and Hawaiian, because that is an impossibility? Make no mistake about it, you cannot be American and be Hawaiian. To be American is to be money-oriented, to be Christian, to be selfish, and above all to be disconnected from and disrespectful towards the Ê»Ä€ina [land]. We all know that what is unique about our culture is its dependence on and love of the land. Only Hawaiian culture comes from Hawaii. Every other culture comes from someplace else... we did not come from Adam and Eve... and we will not be saved by the Christ child from Bethlehem. We came from this earth, we grew right out of this earth, and our survival depends, especially today, on understanding and connecting to this land of our ancestors. Our first and last loyalty has to be to Hawaii... not to Washington DC.

When anti-colonialists like Trask say that to be "American" is to be capitalist-minded and disrespectful towards the lands and Native peoples of this continent, they mean that this corruption and taint will always be inherent to Americanism. Americanism can't escape its taint, can't be made compatible with socialism. So the only way to escape the parasitism of colonialism and capitalism is to rectify Americanism's legacy, which will require making all the occupied nations independent in the way that Hawaii or Puerto Rico are fighting to become independent.

This isn't just because the names "United States" and "Canada" symbolize genocide. It's because the very existence of these states, and of the borders they enforce, violates the right of the colonized nations to self-determination. As Land Back movement advocate Brooks Arcand-Paul said last year, "Borders are a colonial construct. Any border was imposed unilaterally, without consulting the Indigenous Nations that would be impacted. Resolving these issues is not difficult. In Canada, provinces should include Indigenous Peoples, from the bottom up, in discussions about interprovincial borders." The same must apply to the African population on this continent, which is owed the equivalent amount of reparations and should have the right to form an autonomous African oblast. (After the tribes are in a position to negotiate with the colonized African nation towards realizing this goal.)

What are the steps that the indigenous-liberation movement has to reach this point? The Native group the Red Nation describes them as:

1. The Re-Instatement of Treaty Rights

2. The Full Rights and Equal Protection for Native People

3. The End to Disciplinary Violence Against Native Peoples and All Oppressed Peoples

4. The End to Discrimination Against the Native Silent Majority: Youth and The Poor

5. The End to the Discrimination, Persecution, Killing, Torture, and Rape of Native Women

6. The End to the Discrimination, Persecution, Killing, Torture, and Rape of Native Lesbian, Gay, Bisexual, Transgender, Queer, and Two-Spirit People

7. The End to the Dehumanization of Native Peoples

9. The Repatriation of Native Lands and Lives and the Protection of Nonhuman Relatives

Related Topic(s): Settler Colonialism; Socialism, Add Tags
Add to My Group(s)
Go To Commenting
The views expressed herein are the sole responsibility of the author and do not necessarily reflect those of this website or its editors.