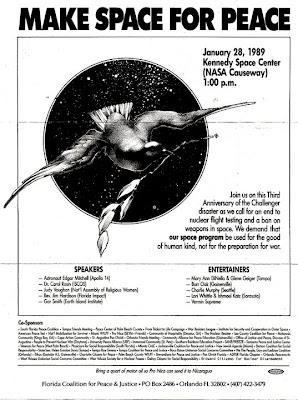 (Image by Unknown Owner)   Details   DMCA
The leaflet above (click on it for a better view) was advertising a protest I organized at the space center in Florida in 1989. This was during the period from 1987-1997 were we held one large protest after the other against the nuclearization and weaponization of space. Sometimes there were 500 people there, frequently about 1,000 came, and our biggest ever was more than 5,000.

Just today my son Julian, who grew up attending these events during his childhood, sent me an email with a link to a book written by Suelette Dreyfus with Research by Julian Assange that was published in 1997. The book was called Underground: Front Page. You can find the book here

Julian told me, "One of the debate topics for the Harvard tournament is about WikiLeaks and I've been doing a lot of research on Julian Assange . Here's a link to a book he worked on...read the first chapter!!!"

So I dutifully clicked on the link.

Much to my surprise I found that the authors began their book with an account of the Florida Coalition for Peace & Justice's 1989 campaign to oppose NASA's launch of the Galileo plutonium-238 space probe that garnered international media coverage. This was the first of three major nukes in space campaigns that I led (the others Ulysses in 1990 and Cassini in 1997).

For weeks, the protesters had been out in force, demonstrating and seizing media attention. Things had become very heated. On Saturday, 7 October, sign-wielding activists fitted themselves out with gas masks and walked around on street corners in nearby Cape Canaveral in protest. At 8 a.m. on Monday, 9 October, NASA started the countdown for the Thursday blast-off. But as Atlantis's clock began ticking toward take-off, activists from the Florida Coalition for Peace and Justice demonstrated at the centre's tourist complex.

That these protests had already taken some of the shine off NASA's bold space mission was the least of the agency's worries. The real headache was that the Florida Coalition told the media it would 'put people on the launchpad in a non-violent protest'. The coalition's director, Bruce Gagnon , put the threat in folksy terms, portraying the protesters as the little people rebelling against a big bad government agency. President Jeremy Rivkin of the Foundation on Economic Trends, another protest group, also drove a wedge between 'the people' and ' NASA's people'. He told UPI, 'The astronauts volunteered for this mission. Those around the world who may be the victims of radiation contamination have not volunteered.'

I'll always remember the 1989 launch of Galileo because it was delayed over and over again for about a week. The international media was gathered at the Kennedy Space Center tourist area with nothing much to do so each day during that week we'd assemble as many activists as we could get and hold another vigil and news conference which helped us tremendously to get the word out around the world about the deadly plutonium space launch.

In chapter 1 of this book is a whole section about a computer worm that got planted inside of NASA's computers during this very time. Was the Galileo delay due to a hacker trying to help us stop that launch? Was a hacker also trying to symbolically "sit on the launch pad"? We've got to learn more about this story. I've already pointed it out to journalist Karl Grossman who helped us break the Galileo story open in 1989.

It just goes to show that you never know who is paying attention to your efforts. Who could have known that Julian Assange , who has become such a big name due to his courageous work with Wiki Leaks, would be moved enough by our campaign to feature it in the first chapter of his book? Maybe it was because it was a classic story about out-of-control technology and the "little peoples" reaction. Any way you cut it one has to acknowledge that it has a nice twist.

One side story should be told here as well. My son Julian was nine years old in 1989 and one day I came home and he had my gas mask on. In his most serious voice he told me, "Don't worry Dad, if Galileo blows up I could wear this gas mask for the rest of my life." He was trying to make me feel better. His words cut right to my heart and my soul and virtually every day since that time I have stayed true to the cause because I believe that no child, my own or anyone else's , should ever have to think of living in a radioactive wasteland wearing a gas mask for their whole life.

Related Topic(s): Computers; Contamination; Galileo; NASA; Peace; Plutonium; Space Exploration; Space-Aerospace; Technology, Add Tags
Add to My Group(s)
Go To Commenting
The views expressed herein are the sole responsibility of the author and do not necessarily reflect those of this website or its editors.