Marcel Reid and Michael McCray, two of the ACORN 8 whistleblowers, addressed more than 5,000 anti-fraud professionals at the virtual 32ndAnnual ACFE Global Fraud Conference on June 21-23. Attendees will also hear from cybersecurity expert Robert Herjavec and former U.S. Attorney of the Southern District of New York Preet Bharara. In addition to hearing from these keynote speakers, attendees can choose from more than 90 sessions taught by leaders in the anti-fraud field. The conference will be emceed by Kate Snow, anchor of NBC Nightly News Sunday and an award-winning senior national correspondent for NBC News. 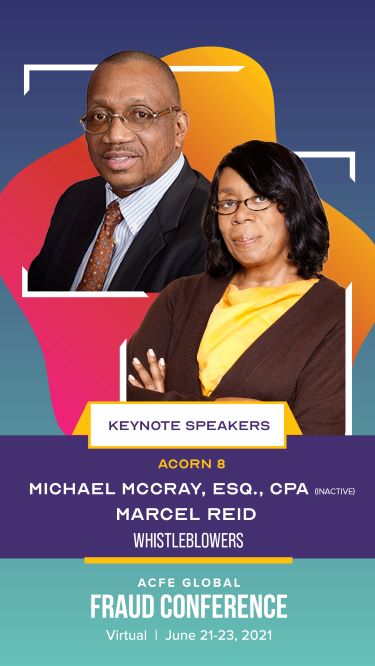 Reid and McCray received the Cliff Robertson Sentinel Award on behalf of the ACORN 8. The Sentinel was first awarded to Oscar-Winning actor Cliff Robertson in 2003, the ACFE's Sentinel Award carries the inscription "For Choosing Truth Over Self." This award is bestowed annually on a person who, without regard to personal or professional consequences, has publicly disclosed wrongdoing in business or government.

ACORN 8 discovered a multi-million-dollar embezzlement at the Association of Community Organizations for Reform Now (ACORN) and ignited a media firestorm that engulfed the venerable association in 2008. A boogie man of the right, numerous detractors engaged the non-profit. Some were disgruntled, others fought for political or partisan advantage, only the ACORN 8 stood the test of time as credible whistleblowers.

"Without the A8 whistleblowers creed: Truth, Transparency & Accountability democracy cannot survive and justice is unattainable. I am deeply honored to receive the Cliff Robertson Sentinel Award because it perfectly describes what the A8 did--we told the truth" states Marcel Reid, ACORN 8. "I am proud to be associated with his memory."

Cliff Robertson was a frequent critic of the movie industry who once said he went to Hollywood only to work and never to live, blew the whistle on David Begelman, the president of Columbia Pictures, in 1977 after he discovered that Mr. Begelman had forged his name to a $10,000 studio check. Mr. Begelman was subsequently accused of embezzling more than $61,000 from the studio. Robertson pressed his complaint against the advice of many in Hollywood who did not want Mr. Begelman to become a liability to the movie industry. Mr. Begelman pleaded no contest to charges of grand theft and was fined $5,000 and sentenced to three years' probation. He was first suspended and then fired.

In 2010, ACORN filed for bankruptcy to thwart public calls for transparency and accountability. "After the fall of ACORN, Wade Rathke dismissively asked 'how are the A8 going to stay relevant?' states Michael McCray, ACORN 8. "I want to thank the ACFE for this award because it answers Rathke's question - the truth will always be relevant. A8 is a group of the best community organizers in the association. Consequently, we organized the most unlikely community of all--whistleblowers."

The Association of Certified Fraud Examiners, Inc., is the world's largest anti-fraud organization and premier provider of anti-fraud training and education. Together with nearly 90,000 members, the ACFE is reducing business fraud worldwide and inspiring public confidence in the integrity and objectivity within the profession. Visit FraudConferenceNews.com for video clips, articles and live updates from the conference.

Michael McCray is a public interest advocate who combats racism and corruption in the government and other institutions which deprive individuals of their basic civil rights, human rights and constitutional liberties. McCray is co-chair of the (more...)

Related Topic(s): Acorn 8-whistleblower Summit; Marcel Reid; Michael Mccray, Add Tags
Add to My Group(s)
Go To Commenting
The views expressed herein are the sole responsibility of the author and do not necessarily reflect those of this website or its editors.

Blowing the Whistle on Mortgage Fraud