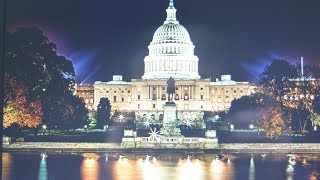 US Capital Tour Visit the US Capital with me! I created this video with the YouTube Video Editor (youtube.com/editor )
(Image by YouTube, Channel: Corbin Travels)   Details   DMCA

The US Capital Building

We may or may not know it but we're living in a revolutionary time in this country that coincides with our earlier time some 244 years ago.

Instead of living under a British sovereign we're now living under a democracy that's become a plutocracy. Our so called republican form of government is so broken it doesn't represent the will of the people. It represents the rich, big corporate, special interests who underwrite the campaigns of those they select to run for office, get elected then enact the laws and regulations, oversight and enforcement that goes to the benefit of those interests.

Our political system controlled by the two major parties of Democrats and Republicans is irretrievably broken. They are incapable of reform and the people instinctively know it.

It doesn't take much to see the overwhelming majority of present officeholders are nothing more than sycophants upholding the existing order.

Retired. The author of "DECEIT AND EXCESS IN AMERICA, HOW THE MONEYED INTERESTS HAVE STOLEN AMERICA AND HOW WE CAN GET IT BACK", Authorhouse, 2009
Related Topic(s): Congress; Democracy; Government; People; Plutocracy; Progressives; Support, Add Tags
Add to My Group(s)
Go To Commenting
The views expressed herein are the sole responsibility of the author and do not necessarily reflect those of this website or its editors.