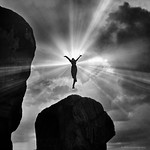 "Imagination can produce a level of well-being that is bulletproof, in the sense that, no matter what happens in life, there is a back-up, there is something that can be created beyond the current crisis..." (The Magician Awakes, Jon Rappoport)

"When I use the word 'magic,' I mean everything that can spring from imagination. Not the silly little things. The big things. The launching of entirely new realities that outdistance what society is producing. And setting a limit on what the individual can imagine and create, and how far he can go, is very much like promoting the idea that every human is ill and should be a medical patient all his life. It's sheer propaganda that seeks the lowest common denominator, as a sales gimmick. In the case of imagination, we're talking about the future of civilization and human life on the planet -- whether it rises or falls, whether the population finally accepts the notion that every person is a victim and there is no way out..." (Notes on Exit From The Matrix, Jon Rappoport)

In the human psyche, from the moment a newborn baby emerges into the light of day, he/she has a desire for magic.

We are told this is an early fetish that fades away as the experience of the world sets in. As maturity evolves. As practical reality is better understood.

In most areas of psychology, sensible adjustment to practical reality is a great prize to be won by the patient. It marks the passage from child to adult. It is hailed as a therapeutic triumph.

In truth, the desire for magic never goes away, and the longer it is buried, the greater the price a person pays.

A vaccine against a disease can mask the visible signs of that disease, but under the surface, the immune system may be carrying on a low-level chronic war against toxic elements of the vaccine. And the effects of the war can manifest in odd forms.

So it is with an inoculation of reality aimed at suppressing magic.

One of the byproducts of the "reality shot" is depression.

The person feels cut off from the very feeling and urge he once considered a hallmark of life. Therefore, chronic sadness. Of course, one explains that sadness in a variety of ways, none of which gets to the heart of the matter.

It is assumed that so-called primitive cultures placed magic front and center simply because "they couldn't do better." They didn't have science, and they couldn't formulate a "true and rational" religion with a church and monks and collection plate and a European choir and an array of pedophiles.

Historically, the impulse for magic had to be defamed and reduced and discredited. Why? Obviously, because the Westerners who were poking through ancient cultures had already discredited magic in themselvesthey had put it on a dusty shelf in a room in a cellar beyond the reach of their own memory. But they couldn't leave it alone. They had to keep worrying it, scratching it, and so they journeyed thousands of miles to find it somewhere else -- and then they scoffed at it and tried to crush it.

And we wonder why, under the banner of organized religion, there has been so much killing. At a deep level, the adherents know they've sold their souls and they're depressed, angry, resentful, remorseful, and they want to assuage and expiate their guilt through violence.

But the urge for magic is forever.

Related Topic(s): Artists; Computers; IMAGINATION; Magic; People; Religion, Add Tags
Add to My Group(s)
Go To Commenting
The views expressed herein are the sole responsibility of the author and do not necessarily reflect those of this website or its editors.