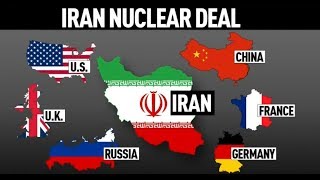 The P5&1 countries signing nuclear deal with Iran. Trump has threatened to withdraw the US by May 12 if the deal is not "fixed".

As we know in July 2015 the US, Britain, France, Russia, China plus Germany-the P5&1--the five permanent members of the UN Security Council plus Germany signed a nuclear deal with Iran. Essentially Iran agreed to inspections limiting its nuclear program and sanctions against it would be lifted. Iran has fully complied with the agreement.

However President Trump has been critical of the deal believing it was too lenient on Iran-and wrongfully as it happens--he maintains Iran hasn't fully complied particularly over its testing of ballistic missiles--which significantly was not part of the deal. So despite Iran being in full compliance Trump has threatened to withdraw the US unless the deal is renegotiated. All the other signees want the agreement left as is. Iran has said it would not renegotiate the deal.

May 12 is the deadline for the US to recertify the deal and Trump has said he will withdraw the US unless the deal is "fixed" by that date-little more than three weeks away.

Here's a few things to consider:

On May 27 Kim is to meet with South Korean President Moon in the Panmunjom demilitarized zone to discuss a peace treaty officially ending the Korean war of 1950-'53. Such a peace treaty has never been signed. It must also include the US and China as they were a part of the 1953 armistice that ended the hot war. The two Korean leaders are also to discuss reunification of the two Koreas.

Kim has indicated he is willing to discuss denuclearization of the North if there is a peace treaty. A potential stumbling block is the 30,000 US troops stationed in South Korea, which undoubtedly Kim would demand the US withdraw as part of the peace treaty.

Though the Iran nuclear deal and Trump's meeting with Kim don't appear to be directly linked if Trump reneges on the Iran deal on May 12, how would that affect Trump's meeting with Kim later in May or early June? Would the meeting even take place? If Kim concludes the US president would not honor an international agreement signed by the US with Iran why would he trust Trump in any peace agreement the US signed with him officially ending the Korean war--to say nothing about Trump agreeing to send the 30,000 US troops out of the Korean peninsula?

To further complicate matters there is John Bolton, Trump's new National Security Adviser, who has not been shy as a TV analyst indicating the US should bomb Iran and North Korea. Pompeo during his time as CIA director had similar leanings.

A week ago the leaders of the US, Britain and France sent 107 cruise missiles into Syria over an alleged chemical attack attributed to Syrian President Bashar Assad gassing his own people. A chemical attack that likely never happened and has been debunked by independent journalist Robert Fisk [1] on the scene in Douma where the attack allegedly occurred and talking directly with residents and a doctor who said the people had suffered from dust inhalation from a bombing attack and not a chemical gas attack. The cruise missiles were sent before The Organization for the Prohibition of Chemical Weapons--OPCW--could arrive on the scene to confirm whether a chemical attack actually occurred. The OPCW inspectors have yet to enter the alleged scene in Douma over security concerns for their safety. Though this writer can't confirm this the residue of a chemical attack supposedly remains on walls and the soil for months. So current accusations against Russia not permitting the inspectors to enter and them destroying evidence is not credible.

As for the cruise missile attacks it was only Secretary of Defense James Mattis who advised Trump the attack be "moderate" and no Russian, Iranian or Syrian army troops be targeted. This over the supposed objections of Bolton who wanted a more intensive strike. Now it's been learned the de-confliction zone between the US and Russia in Syria was discussed with the military leaders of both sides before the missile attacks commenced so as not to occur within that zone--the US military wanting at all costs no direct confrontation with the Russian military in Syria.

But with Bolton now firmly ensconced in the White House as Trump's National Security Adviser and Pompeo needing only Senate confirmation as Secretary of State and neither aligned with Mattis' ideas and Trump supposedly not enamored with Mattis, the war secretary's days may be numbered thus removing the one adult in the room who at least knows war intimately.

All the above with neo-cons Bolton and Pompeo seemingly having full sway with the unpredictable Trump makes May and June a truly inauspicious time that's fast approaching.

Retired. The author of "DECEIT AND EXCESS IN AMERICA, HOW THE MONEYED INTERESTS HAVE STOLEN AMERICA AND HOW WE CAN GET IT BACK", Authorhouse, 2009
Related Topic(s): Agreement; Iran, Add Tags
Add to My Group(s)
Go To Commenting
The views expressed herein are the sole responsibility of the author and do not necessarily reflect those of this website or its editors.