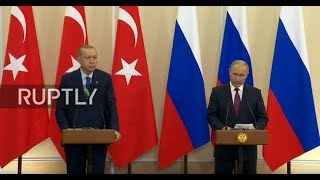 Yesterday in the Russian resort of Sochi, Russian President Putin and Turkish President Erdogan agreed on a "demilitarized zone" of 20 kilometers (12.4 miles) separating the Syrian Arab Army from the alphabet soup of al Qaeda militants in Idlib Province, Syria.

Russian and Turkish troops will patrol and enforce the zone. It is to be implemented by October 15.

Though exact details of the zone are yet to be announced its presumed to be at the perimeter of Idlib Province with other neighboring Syrian provinces.

All military equipment, guns and ammo within the zone are to be removed.

The zone will provide a sort of humanitarian corridor for innocent Syrian people of Idlib to traverse and resettle in other areas of Syria.

What this zone does is force the al Qaeda militants to withdraw toward the center of Idlib.

The agreement also forces the US and its NATO British and French allies to step back from its belligerent rhetoric of attacking Syrian government positions if its SAA and Russian allies initiate a full scale attack on Idlib.

However, what the agreement does is put off the day of reckoning; ridding all of Syria of this terrorist scourge, something Assad has said is necessary to liberate all the Syrian people from this menace.

Though it's a truce of sorts this demilitarized zone puts the onus on Turkey. In the past it has provided arms to the al Qaeda militants and allowed them to enter Syria from Turkey.

Now what happens at the border of Idlib Province and Turkey? With this demilitarized zone will Turkey allow these militants to withdraw from Idlib into Turkey? Surely Erdogan doesn't want these militants to initiate terror attacks in Turkey.

But with this demilitarized zone in place and Turkey along with Russia responsible to maintain it, it's clearly forced Erdogan's hand against these jihadist mercenaries.

Other parts of the agreement have to do with freeing up the main highway from Latakia to Aleppo which runs directly through the center of Idlib. How that would be accomplished remains to be seen.

For now at least this demilitarized zone provides a step back from the brink of an expanded war in Syria.

Retired. The author of "DECEIT AND EXCESS IN AMERICA, HOW THE MONEYED INTERESTS HAVE STOLEN AMERICA AND HOW WE CAN GET IT BACK", Authorhouse, 2009
Related Topic(s): Demilitarized Zone; Syria, Add Tags
Add to My Group(s)
Go To Commenting
The views expressed herein are the sole responsibility of the author and do not necessarily reflect those of this website or its editors.