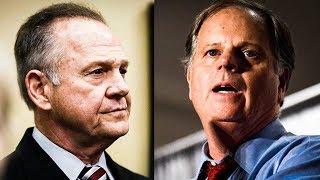 Dear Alabama voters, in a few days you will cast one of the most consequential votes of your lifetime that will change the course of history and greatly impact your lives. Please consider the following.

You have read much about the tax bill that most analysts agree will impose a tax increase on many Alabamians and Americans with incomes under $75,000 a year. According to the Bureau of Economic Analysis, in 2016 Alabama ranked 47th of all 50 states in per capital income, with an average income of under $39,000 a year. The many Americans with incomes under $75,000 who will be slammed by tax increases under this bill include many Alabamians. Ask your tax preparer if you are one of them.

If Doug Jones is elected to the Senate, he would fight against every tax increase, in every bill, that Washington would impose on middle-class or poor Alabamians. He would fight for larger tax cuts for every Alabamian who needs it. When Roy Moore suggests otherwise, he is violating the Ten Commandments, which teach "thou shalt not bear false witness against thy neighbor."

If Moore is elected to the Senate the Republican leader, Sen. Mitch McConnell (Ky.), will gain one more vote for tax bills similar to the highly unpopular tax cut for the rich that is pending today.

If Jones wins, middle-class Alabamians will have a fighter on their side. Poor Alabamians will have a champion for their cause. If Moore wins, the big winners will be wealthy billionaires, multinational conglomerates and giant Wall Street banks who receive the most lavish benefits from the policies Moore and McConnell promote.

Today Alabamians pay some of the highest insurance premiums in America. Health-care analysts warn the tax bill will raise premiums even higher for tens of millions of Americans, including many in Alabama.

As a leading Alabama newspaper wrote endorsing Jones, decency itself is on the ballot next week. Moore slanders every one of the nine women who came forward by claiming they are all lying. He insults every shopping mall employee who has told of having to protect teenagers from Moore while he cruised the malls at night by claiming they are lying, too. Moore victimizes the women again by attacking their honor now, after he abused them when they were young with his predatory behavior.

If Alabama becomes known as the place where predators can prowl in pursuit of girls in the malls at night and be sent to the Senate, businesses that are thinking of coming to Alabama will not come, some may leave, boycotts could begin and your economy will pay a price.

Doug Jones is a good man with a stellar reputation in the community, a former prosecutor who believes in fighting crime and advancing justice, a champion of lower taxes and insurance premiums for those who need them, and a leader who will make Alabamians proud if he serves you in the Senate.

Related Topic(s): Alabama Election; Billionaires; Doug Jones; Predator; Roy Moore; Voter Participation, Add Tags
Add to My Group(s)
Go To Commenting
The views expressed herein are the sole responsibility of the author and do not necessarily reflect those of this website or its editors.