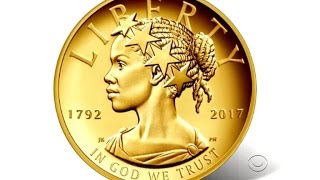 It came in the mail and I hesitated before tossing it out with the rest of the unsolicited communications. Being an occasional collector of coins, I usually give the catalogue from the U.S. Mint at least a cursory look, but something struck me as different about this one, the "Treats of the Season" holiday gift guide. I just couldn't figure out what it was, so I set it aside.

A little while later when I picked the guide up again, I saw it right away, but also questioned what I was seeing. "Is that a strong, young woman of color on the $100 Liberty coin?" I asked myself, smiling incredulously. ''An African-American Lady Liberty? In 99.99% 24-karat gold?''

Why yes it is, the Mint catalogue writers informed me. To celebrate the 225th anniversary of its founding, the Mint has initiated a series of gold coins depicting Lady Liberty as different ethnicities. Following the first symbolic African-American woman to grace a United States coin, will come Asian-American, Hispanic-American, and Indian-American figures, to reflect "the cultural and ethnic diversity of the United States," the Mint said.

"Well, of course," I said. "Perfect," I said. Ironic in spades. Still grinning, I wondered, "Does he know about this? He couldn't possibly know about this. He would surely have tweeted something " And since these coins are already available, why am I just learning about this?"

The Mint announced its plans for the commemorative coin in January, before the, um, inauguration. At the time, I was hospitalized and preoccupied, recovering from a serious auto accident. The coin slipped by me. They started minting the coins in April at West Point, not far from where I live. Love that local touch, but again, I was still otherwise occupied. But what's the dotard's excuse? After all, gold is his favorite color.

Of course, these coins are for collectors or investors, not flim-flam artists who borrow other people's coin of the realm and don't bother to pay it back. I somehow can't see him encouraging his young children to collect coins unless the family name were stamped on them. (The thought that it may well happen just sent chills through my body.)

Back to Lady Liberty.

The coin apparently did not totally escape notice of the bigots who are a significant segment of the so-called core Trump supporters. A quick search of the Internet turned up these comments reported by AP as coming from Twitter:

-- "The discrimination of white people by the [Obama] administration continues.''

-- "This administration doing everything to change history, including changing Lady Liberty from what the French sent us. Pathetic racism!"

The coins obviously were commissioned by the Mint during Barack Obama's administration. But clearly a large number of Americans still don't think that electing an African-American president was a powerfully symbolic, inclusive act that gave truth to the boast that, in America, "anybody can be elected president." Actually, the dotard is daily living proof of that decree.