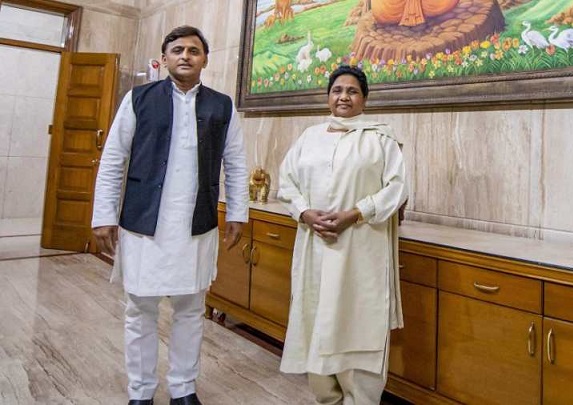 Mayawati and Akhilesh Yadav, leaders of Bahujan Samaj Party (BSP) and Samajwadi Party (SP), haven't found their voice since Exit Polls. Mayawati hasn't tweeted once; Akhilesh has tweeted only twice that too no words only photo-ops with AAP and BSP leaders.

That's unusual silence from two biggies of Uttar Pradesh. I mean for nearly two decades, it was baton-passing between SP and BSP. Voters elected one and ditched for the other every alternate elections. Both protected their vote-banks fiercely and it always paid dividends, what if it meant contrasting each other as black and white. Sworn enemies.

Then 2017 assembly elections happened. BJP wrested 325 seats. Both BSP and SP decimated; the latter despite holding on to coat-tails of Congress. A new arithmetic was needed. Survival was at stake. What if SP and BSP got together and Congress became cheerleaders? The experiment was pushed through a few bypolls. Gorakhpur, Kairana and Phulpur gave thumbs up. Eureka, the formula to halt BJP juggernaut had been found.

Much of the run-up to 2019 General Elections was SP-BSP projected as polestar to scattered universe of "Mahagathbandhan." Mamata Banerjee, Chandrababu Naidu, Rahul Gandhi all were in picture but Mayawati-Akhilesh were seen as king-makers, the catalysts. UP gives 80 seats, it was the reason BJP came to power in 2014. If it goes so does Modi. The gang would be back in business.

It was a theory which couldn't be disputed. Neither by the projection nor by the samples of Kairana, Phulpur etc. The data analyst put the committed voters of SP-BSP in a jar, gave it a good shake, and the numbers appeared twice as many to BJP. Game, set and match over.

This did put fear in the heart of BJP backers. The defeats in Madhya Pradesh, Chattisgarh, Rajasthan didn't help. A storm was gathering. Mayawati and Akhilesh were on Cloud Nine. Everyone else appeared so small. Who needs Congress? The Grand Old Party was willing for pre-poll and post-poll patch up. Wasn't their desperation a sign that SP-BSP was the fastest gun in the town?

It's not a postmortem. The results are yet to be out. But the silence in SP, BSP camps are deafening. Political parties don't need to wait for results. They know the ground reality. They know the truth. SP, BSP know their game is up. The Grand-Idea was a stillborn child. Instead, anger is becoming manifest for close aides et tu Brutusare being held out to dry. When that happens, we know Caesar is gone.

If the corollary is right, it means Yadavs votes didn't get transferred to Mayawati; nor the Dalits went to Akhilesh. Muslims, as per experts' view, have also voted in a bigger number for BJP. If that's true, it's a mirror to the future. If development can override caste-equations, SP and BSP have run out of fuel. Stranded on the highway, far from the decorated platforms and garlands in wait.

Mamata Banerjee perhaps would be subjected to a similar analysis. I have noted she has "Vidyasagar" photo on her twitter homepage. That issue was only trending for 12-16 hours. The moment Narendra Modi announced a bigger, costlier, better bust as a replacement, the matter lost its sting. Its' now rotting what Mamata is adorning it as her necklace.

That's why I say all the oppositionSP, BSP, Congress, TMC etcare so out of touch with reality. So is Lutyens Media. Propaganda has won you elections in the past. Not any longer. Rafale, demonetization, jobs nothing worked. Photo-ops are treadmill running, rooted to the spot. Get your hand dirty in the soil. Or be ready to be buried underneath it.

Related Topic(s): Congress; Dalits; Gandhi; Media; Muslims; Polls; Propaganda, Add Tags
Add to My Group(s)
Go To Commenting
The views expressed herein are the sole responsibility of the author and do not necessarily reflect those of this website or its editors.