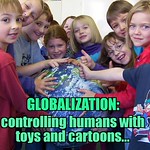 Ever since the fall of the Soviet Union, the United States follow a two-pronged policy that is best summarized by two words: hegemony and globalization. The hegemonic policy is a failure. Wars in the Middle East proved to be costly and a humanitarian disaster. Globalization brought mixed results: unexpected economic growth in emerging countries and unemployment in advanced countries, depriving people of their manufacturing jobs while enriching shareholders. That dual policy was made possible by changes in electoral laws and the creation of a propaganda machinery controlling the six largest mainstream-media corporations.

The platforms of the two main candidates were at the opposite end of the political spectrum. Donald Trump rode on a wave of discontent, breaking away from the Establishment's two-pronged policy. His ultimate objective is lower taxation and deregulation, which will benefit the so-called "1%". He cannot keep the promises he made. Manufacturing jobs are gone for good.* High tariffs and a depreciation of the dollar will not bring them back. Advocating better relations with Russia while pledging more resources to the defense budget makes no sense. From Vladimir Putin's point of view, it can only be seen as a deception to induce him to let his guard down. Four years from now, his electorate will be worse off than it is today.

Would a Hillary Clinton's presidency have brought better results? The answer is "no". Hillary Clinton would have pursued the two-pronged strategy with alarming consequences. Her "no-fly zone" policy in Syria was a casus belli. Army Chief of Staff Joseph Dunford told the Senate: "For us to control all the air space in Syria would require us to go to war against Syria and Russia. That's a pretty fundamental decision that I am certainly not going to make." On the domestic front, her well-advertised links with Goldman Sachs and her late, reluctant rejection of the Trans-Pacific Partnership Trade deal show the direction her economic policy would have taken. Her presidency would have brought back the Cold War era with little, if any, benefit for the lower class. All the same, the anti-Trump media campaign goes unabated. It is justified by the President's assaults on the rule of law. This may be but why did the media remain silent when the Patriot Act of 2001, the Foreign Intelligence Surveillance Amendments Act of 2008, and the National Defense Authorization Act of 2012 were put on the books?

Donald Trump will not bring peace or jobs. Neither would have Hillary Clinton. The only two candidates who might have done so, Bernie Sanders or Jill Stein, were cut off from the race. This can only be seen as a failure of the American democracy. The Republic has become a plutocracy. The question is: where will it go from here?

*The Unemployment rate is not 4.5%, but 10% when discouraged workers are included in the official statistics.

Related Topic(s): American Foreign Policy; American Hegenomy; Anti-trump; Democracy; Demonstrations; Dollar; Law; Manufacturing; Peace; Presidency; (more...) Propaganda; Unemployment; Vladimir Putin, Add Tags  (less...)
Add to My Group(s)
Go To Commenting
The views expressed herein are the sole responsibility of the author and do not necessarily reflect those of this website or its editors.