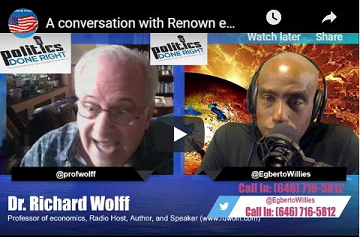 Today we have the honor of having Economist Dr. Richard Wolff with us. He is Professor of Economics Emeritus, University of Massachusetts, Amherst where he taught economics from 1973 to 2008. He is currently a Visiting Professor in the Graduate Program in International Affairs of the New School University, New York City. Earlier he taught economics at Yale University (1967-1969) and at the City College of the City University of New York (1969-1973). In 1994, he was a Visiting Professor of Economics at the University of Paris (France), I (Sorbonne). He was also a regular lecturer at the Brecht Forum in New York City.

Related Topic(s): Economists, Add Tags
Add to My Group(s)
Go To Commenting
The views expressed herein are the sole responsibility of the author and do not necessarily reflect those of this website or its editors.