To fight today's extreme inequality, we must strengthen the coalition of progressive democrats and challenge the global oligarchy. 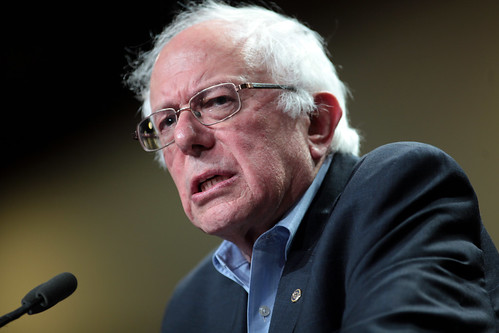 On November 19, 1863, standing on the bloodstained battlefield of Gettysburg, Abraham Lincoln declared that "we here highly resolve that these dead shall not have died in vain -- that this nation, under God, shall have a new birth of freedom -- and that government of the people, by the people, for the people, shall not perish from the earth."

One hundred and fifty-five years later, under an authoritarian-leaning president, a right-wing extremist Congress, and a corrupt campaign-finance system, I fear that Lincoln's vision is fading, that "government of the people, by the people, and for the people" is beginning to perish in the United States of America.

Today, the richest 1 percent of American families own a greater portion of the country's wealth than the bottom 90 percent. Even more shocking, just three individuals own more wealth than the bottom half. Meanwhile, the incomes of the top earners continue to skyrocket -- CEO compensation jumped as much as 937 percent between 1978 and 2016 -- while most Americans struggle to get by on stagnating wages.

Such extreme inequality not only threatens our economic well-being; it undermines our democracy. Since the Supreme Court's disastrous Citizens United decision in 2010, billionaires have poured huge amounts of money into the political process. In return, they are getting policies that serve their interests at the expense of working families, the environment, and our national security.

Consider the Koch brothers: After winning huge tax breaks and major rollbacks of environmental regulations, their network of advocacy groups is planning to spend up to $400 million during the 2018 elections to push their conservative policy agenda. Sheldon Adelson, meanwhile, recently cut a $30 million check to the Republicans after his company received a $670 million tax break from the Trump tax plan, and the same week that the Trump administration delivered on two of Adelson's biggest priorities: withdrawing from the Iran nuclear deal and moving the US embassy in Israel to Jerusalem. And the Walt Disney Company, which pours millions of dollars into campaigns, has been rewarded with copyright extensions worth billions, all the while paying many of its employees starvation wages.

While authoritarians promote division and hatred, we will promote unity, inclusion, and justice.

Quite simply, in the United States today, a handful of billionaires and the corporations they run exercise extraordinary power over our economic, political, and social life. Yet this is not just a domestic issue. It is a global issue, one that reaches across oceans and continents as oligarchy, authoritarianism, and kleptocracy spread from country to country, and democratic institutions fight for their survival.

In Russia, Vladimir Putin -- who stands at the center of a tight circle of oligarchs and is believed by many to have great personal wealth -- is not only undermining democracy at home but destabilizing countries abroad. In Saudi Arabia and other Middle Eastern monarchies, a handful of multi-billionaire despots exerts enormous influence over global energy policy and, under Trump, over American foreign and military policy.

In China, President Xi Jinping has steadily consolidated power around himself and his inner circle as his government clamps down on political freedom and aggressively promotes China's version of authoritarian capitalism abroad. And Eastern Europe, which suffered horribly from the scourge of fascism, is once again seeing the rise of demagogues like Hungarian Prime Minister Viktor Orba'n and Germany's Alexander Gauland, one of the heads of the far-right Alternative for Germany party.

Donald Trump, therefore, should not be seen in isolation. He is part of a global trend, and the oligarchic, authoritarian, kleptocratic tendency he represents should be understood as a symptom of a much broader problem: a small number of extraordinarily wealthy people, motivated by greed and power, who see the global community as their plaything.

These forces have proved adept at capitalizing on the very real concerns that hundreds of millions of people face throughout the world. In many countries, people rightly feel that the establishment has failed them. They are struggling financially, fear for their children's future, and are grappling with the loss of social and economic status. Rather than address these grievances, however, authoritarians exploit them, creating scapegoats and pitting one group against another.

In order to fight this trend, we need to strengthen the global coalition of progressive democrats. While authoritarians promote division and hatred, we will promote unity, inclusion, and an agenda based on economic, social, racial, and environmental justice. But the first step in winning this fight is to correctly identify the challenge.

Internationally, we must have the courage to take on the global oligarchy and bring power to the many, not the few. This world belongs to all of us, not just a handful of billionaires.

Related Topic(s): Billionaires; Economic; Inequality; Justice Denied; Money; Progressive Democrats; World Issues, Add Tags
Add to My Group(s)
Go To Commenting
The views expressed herein are the sole responsibility of the author and do not necessarily reflect those of this website or its editors.