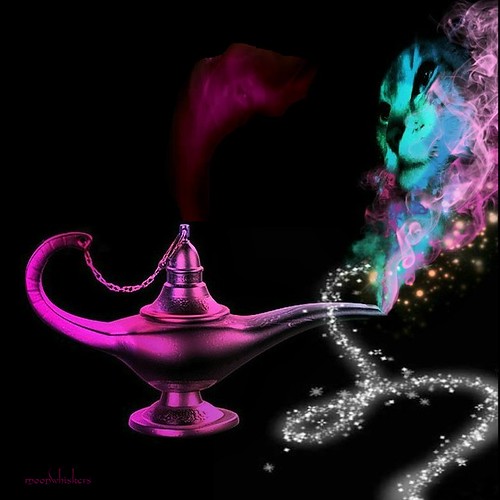 THIS MAGIC MOMENT
(Image by Cats by moonwhiskers)   Details   DMCA

Depressed by the United States' and its French and British lackeys' war-crimes attack on Syria, I took a walk in the woods on this beautiful spring morning. Deep up on a mountainside, I almost tripped over an old oil lamp whose metal seemed preternaturally shiny. I picked it up and set it on a nearby boulder, brushing off some caked-on dirt.

To my astonishment, a genie emerged, standing on the rock. "You summoned me, sir," he said. "Do you wish to make a wish? I must warn you that I can only grant you one."

As you can imagine, I was flabbergasted, but since as I walked I had been talking to my father who died 25 years ago, telling him of my anguish over the savage deeds of the U.S., a country leading the world to the brink of nuclear annihilation, I blurted out, "Yes, my wish is for you to bring my father back to life on earth." The genie's face dropped and he said, "I am sorry, sir, but that kind of wish is beyond my power. Do you have another wish?"

I thought for a moment and said, "Yes, I wish that my country the United States would change radically and never again attack Syria or any other country and that it would beat its weapons of war into plowshares."

Again the genie's face dropped, but he said, "Oh, sir, what is your father's name?"

Related Topic(s): Change; War -Antiwar; Weapons, Add Tags
Add to My Group(s)
Go To Commenting
The views expressed herein are the sole responsibility of the author and do not necessarily reflect those of this website or its editors.