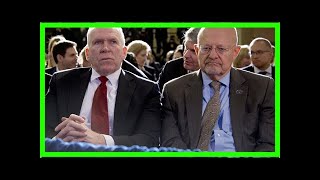 Many Americans, at least most in my circle, are enjoying watching Donald Trump self-destruct. It's bad for the country, but to some of us it's as much fun as watching a train wreck. And maybe if the Democrats can get their act together, they can win back the House in 2018 and the Senate and White House in 2020. Trump is making it look like it might be easy.

But I have a warning for Democrats, and indeed for all Americans. For God's sake, don't elevate the likes of former CIA directors Michael Hayden and John Brennan and the former director of National Intelligence, James Clapper, to the position of "senior statesmen." They are not the voices of reason, either for the Democrats or for anybody else. They are monsters who have ignored the Constitution, the US code, and international law. They have committed war crimes and crimes against humanity. We should shun them, not celebrate them.

Hayden is probably the most public of the three. The former director of both the NSA and the CIA has never seen a camera that he didn't want to get in front of. He's a regular on the Sunday morning talk shows, the cable news networks, and even Comedy Central. He sucks up to the right and then sucks up to the left if he thinks it'll get him a little screen time. But let me tell you something from personal first-hand experience: I am convinced that he's a danger to the American way of life.

Hayden headed the NSA from 1999 to 2005. It was on his watch that the NSA made the decision to spy on American citizens when he championed the Trailblazer Program. It was Hayden who targeted whistleblowers Thomas Drake, Bill Binney, and Kirk Wiebe. It was Hayden who created a domestic call telephone database to keep a record of every phone call and text message made by every American and to hold it forever. And he's been utterly unapologetic. Hayden said during his confirmation hearings that intercepting the communications of Americans was "consistent with the Constitution," even if it meant overriding or ignoring laws forbidding warrantless wiretapping.

Hayden served as CIA director from 2006 to 2009, where he oversaw the agency's system of secret prisons and the extraordinary rendition program. While there, he steadfastly supported the agency's torture program, lied to Congress about it, and tried to loosen regulations that would have allowed drone strikes based on the "behavior of ground vehicles."

And don't forget that Hayden, along with others relegated to the dustbin of history like former CIA leaders George Tenet, Jose Rodriguez, Mike Morrell, John McLaughlin, and Philip Mudd, all co-authored a "rebuttal" of the Senate Torture Report, saying that torture worked. And it wasn't really torture. Shameful. ("Won't somebody please think of the torturer!")

Like Hayden, John Brennan did incredible damage to our civil liberties during his tenure as Barack Obama's deputy national security adviser for counterterrorism and as CIA director. It is impossible to calculate the number of people John Brennan killed during his time in government, none of whom had the Constitutional benefit of having been charged with a crime, of having evidence presented against them, or of facing their accusers in a court of law. Brennan, the keeper of the infamous "kill list," decided who would live and who would die. It was as simple as that. Brennan had no respect for the law and no tolerance for any journalist or citizen who challenged him on it.

Brennan also had no respect for the Congressional oversight committees. He famously ordered his spies to hack into the computer system of the Senate Select Committee on Intelligence, lied about it, and then when caught, filed a "crimes report" with the Justice Department asking that the Intelligence Committee investigators be arrested. If that isn't anti-Constitutional authoritarianism, I don't know what is.

An even more important thing that we should remember about Brennan is that he was not a johnny-come-lately to intelligence. He didn't just appear in the Obama campaign as a fresh-faced CIA Democrat. He had been the Number 3 at the CIA during the George W. Bush administration. He was up to his neck in the torture program, his denials notwithstanding. He was no liberal.

Brennan is now a fellow at Fordham University, his alma mater, where he is free to propagandize the young people of our country. He's also a frequent talking head at the Council on Foreign Relations and other groups where the swells meet to think the big thoughts. The rumor in Washington is that he's on every Democrat's short list for Secretary of State or Secretary of Defense post-Trump. God help us.

James Clapper is perhaps most famous, or infamous, for looking Senator Ron Wyden in the eye in an open hearing of the Senate Intelligence Committee and telling him point blank that the NSA was not, repeat not, spying on American citizens. Lying to Congress is a crime. Spying on Americans is a crime. But Clapper paid no price for his insolence.

When Clapper finally submitted his resignation in 2016, Wyden said, "During Director Clapper's tenure, senior intelligence officials engaged in a deception spree regarding mass surveillance. Top officials, officials who reported to Director Clapper, repeatedly misled the American people and even lied to them." That's Clapper's legacy. He's a liar.

That brings us back to the issue of statesmanship. It is possible, and in this case obvious, that you can have a situation where there is no good guy. It's time for the Democrats to clean up their act. They're going to be the party of freedom, civil liberties, and human rights or they aren't. They need to choose. They can still end up on the right side of history. But that's only if they shun monsters like Mike Hayden, John Brennan, and Jim Clapper and others like them, and if they start paying a little more attention to the Constitution.

Related Topic(s): American Facism; Cia Chief John Brennan; Crime; James Clapper; Mike Hayden; Rights, Add Tags
Add to My Group(s)
Go To Commenting
The views expressed herein are the sole responsibility of the author and do not necessarily reflect those of this website or its editors.