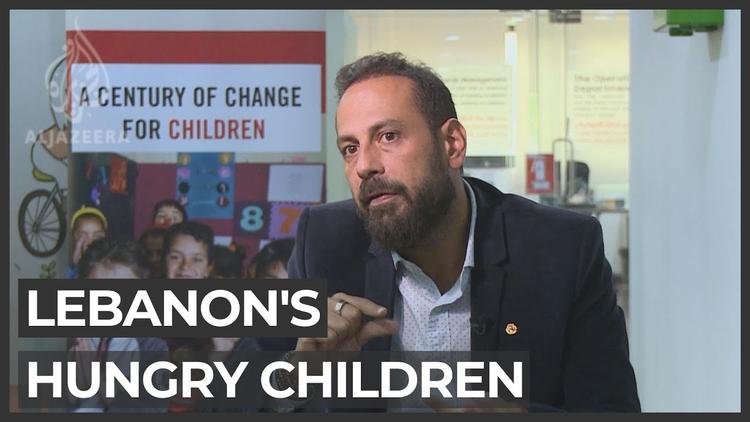 Lebanon, a small country of 4.7 million citizens and another 1.5 million Syrian refugees and 400,000 Palestinian refugees, is facing a perfect storm. Its corrupt political elite has permitted a near-collapse of a once-solid banking system. Government services are paralyzed and there are electricity outages.

The country, which is a mix of Christians, Sunnis, Shiites and Druze (among others), last suffered a major famine during World War I, when European Powers blockaded Beirut as part of the war effort against the Ottoman Empire. 103 years later, the wolf is again at the door, and children are in danger. A new Save the Children report says that "910,000 people, including 564,000 children do not have enough money to buy the basic essentials, including sufficient food. "

Lebanon's Save the Children director, Jad Sakr, was quoted by MEMO as saying, "We will start seeing children dying from hunger before the end of the year."

The foreign minister, Nassif Hitti, just resigned in frustration that the cabinet is unable to take any decisions. The government has been unable to satisfy the International Monetary Fund that it will reform banking and the electricity sector, and France, Lebanon's closest European patron, is declining to give aid until the IMF deal is done.

Then on top of all that, the coronavirus hit globally. Lebanon is highly dependent on tourism and the remittances of Lebanese laborers living abroad. But the tourists have stopped coming and many of the laborers have lost their jobs.

The banking and currency crises have made things even worse, Save the Children says. Food and rent have rocketed by 169% since last year this time. Inflation has sent families' purchasing power plummeting by 85 percent. (When a currency craters, it makes imports expensive, and Lebanon imports a lot of its food).

Over a third of all jobs have been lost.

Since much of the problem derives from a highly corrupt executive that is unable or unwilling to show leadership in combating the coronavirus and the economic problems, and since the US is suffering the same syndromes, you have to wonder if dystopian Lebanon is not a mirror in which we can see some of our own future.

The pandemic statistics for Lebanon so far are not so bad on the surface. It has had a little over 5,000 cases and 65 deaths, though it is hard to have much faith in government statistics, and you have to imagine that a lot of elderly are dying at home without ever having been diagnosed. In US terms, it has had the equivalent of 4,563 deaths, which is a fraction of the actual US deaths, but it isn't anything to be proud of, either. Hong Kong is just a bit more populous than Lebanon if you count all the latter's residents, and it has only had 10 deaths.

But the Lebanese government seems to have evidence of community spread on an alarming scale, so it is going into lockdown again for five days, or maybe two weeks.. People are apparently getting sick and spreading the virus around from going to weddings and parties. I used to live in Lebanon, and, yes, you can't imagine life there without those things.

But the secondary effects of the pandemic could also prove deadly.

Related Topic(s): Children; Corruption; Death; Food; Lebanon; MILLIONS STARVING; Pandemic, Add Tags
Add to My Group(s)
Go To Commenting
The views expressed herein are the sole responsibility of the author and do not necessarily reflect those of this website or its editors.