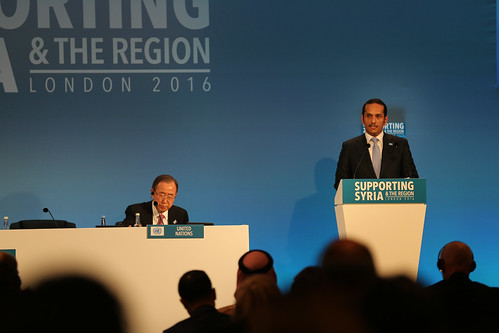 Qatar and Turkey on one hand, Saudi Arabia, UAE, Egypt and Bahrain on the other, two fronts of the recent Middle East crisis. Both are Sunni Muslims. The current crisis actually proved that the apparent Sunni-Shia conflict is no longer extant, a conflict which did not exist at all. Today's wars loomed over political interest, wars of profits and ambitions. As the Syrian and Iraqi wars, just like the current Gulf crisis broke out upon the interests.

The article aims to walks you through various cause and reasons which resulted in tension between some Middle Eastern countries-mostly Qatar and Saudi Arabia after boycotting Qatar:

- Through selling oil and petroleum products, the two above mentioned fronts are financially enriched and wealthy. Their financial incentives make them to spend money on buying weapons from American companies.

- Both fronts consider themselves as believers to the Wahhabism doctrine. Saudi Arabia is much more adherent to this doctrine, while Qatar sees itself just as connected to the generation of Mohammed Abdul Wahhab and has not such a fanatical belief in his principles.

- If we take a look back to the recent wars and terrorist attacks and the perpetrators, we will find out that about 90 percent of terrorist groups were either related to Wahhabism or somehow the believers of brotherhood thinking.

- The leaders of two fronts --whether Saudi Arabia, Bahrain, Egypt and UAE or Qatar and Turkey are not fanatical Muslims in their personal lives; they are unbelievers in Islam and at their leisure time, they step beyond the boundaries of Islam principals. These two fractions both are Arabs and, actually there is no longer any trace of Arab versus non-Arab war, or the war between Sunni and Shia. The Qatar crisis can be considered as a family conflict which broke out among some Arab nations for seeking power and retaining domination.

- From the other perspective, the two fronts claim to sovereignty of Islamic and Arab world; and they inclined to introduce themselves as the leader of Islamic Arab world, while both, at the same time are closely interacting with United States, European Union and United Kingdom to have them pave the way for them to claim sovereignty.

It can be claimed that the current Middle East crisis, and Qatar -- Saudi Arabia tensions specifically has no religious origins.

The above statement can be proved by this claim that the both fronts are attributed to Wahhabism belief -though one more and the other less, as the Syrian war did not indeed break out over religious believes.

The Saudis wanted Bashar al-Assad to surrender to their power and be their obedient, but Bashar resisted and found himself in the state of war. The claim is also true for Iraq. If the Iraqi Prime Minister Haider al-Abadi had resisted, the war won't have been started in the country. So, Riyadh had nothing to do with Bashar or Heidar al-Abadi's religious belief. Therefore, the struggle took place over gaining power and authority while the players put religion or religious belief as an excuse for running such wars.

The current crisis in Qatar can be analyzed at two levels of international and the regional level. Countries such as United States, Russia, Britain, and France at the international level each trying to maximize their own benefits in the crisis (in form of binding arm sales contracts and boosting bilateral ties).

This should not be forgotten that the regional players each are handy monkeys trained by international players. Indeed, the regional players have no independent role in the crisis and their authority in making decision in regional macro policies is too limited. The Qatar crisis cannot possibly upset the strategic arrangements of the area but it will certainly stir up all player's interests.

Multilingual Translator and Freelance Writer, PhD.D candidate, Studying Politics and international Studies at SOAS
Related Topic(s): Conflict; Other; Regional, Add Tags
Add to My Group(s)
Go To Commenting
The views expressed herein are the sole responsibility of the author and do not necessarily reflect those of this website or its editors.

A War of Monkeys, Every Man Fights for Himself