On November 19-22, 2011, the trial of George W Bush [ former U.S. President ] and Anthony L Blair [ former British Prime Minister ] will be held in Kuala Lumpur - this is the first time that war crimes charges will be heard against the two former heads of state in compliance with proper legal process. 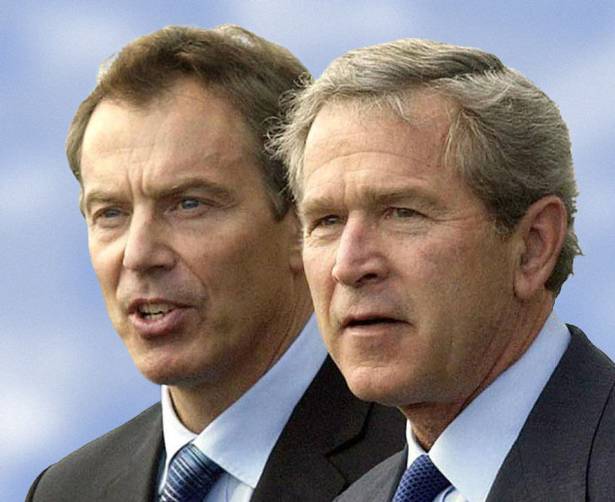 The trial of George W Bush (former U.S. President) and Anthony L Blair (former British Prime Minister) will be held in Kuala Lumpur - this is the first time that war crimes charges will be heard against the two former heads of state in compliance with proper legal process.

The trial will be held in an open court on November 19-22, 2011 at the headquarters of the Al- Bukhary Foundation at Jalan Perdana, Kuala Lumpur.

Charges are being brought against the accused by the Kuala Lumpur War Crimes Commission (KLWCC) following the due process of the law. The Commission, having received complaints from war victims in Iraq in 2009, proceeded to conduct a painstaking and an in-depth investigation for close to two years, and in 2011, constituted formal charges on war crimes against Bush, Blair, and their associates.

The Iraq invasion in 2003, and its occupation, had resulted in the death of 1.4 million Iraqis - countless others had endured torture and untold hardship. The cries of these victims have thus far gone unheeded by the international community - the fundamental human right to be heard has been denied to them.

As a result, the KLWCC had been established in 2008 to fill this void and act as a peoples' initiative to provide an avenue for such victims to file their complaints and let them have their day in a court of law.

The first charge against George W Bush and Anthony L Blair is for Crimes Against Peace wherein:

The Accused persons had committed Crimes against Peace, in that the Accused persons planned, prepared, and invaded the sovereign state of Iraq on 19 March 2003, in violation of the United Nations Charter and international law.

The Accused persons had committed the Crime of Torture and War Crimes, in that: The Accused persons had willfully participated in the formulation of executive orders and directives to exclude the applicability of all international conventions and laws, namely the Convention against Torture 1984, Geneva Convention III 1949, Universal Declaration of Human Rights and the United Nations Charter in relation to the war launched by the U.S. and others in Afghanistan (in 2001) and in Iraq (in March 2003); Additionally, and/or on the basis and in furtherance thereof, the Accused persons authorized, or connived in, the commission of acts of torture and cruel, degrading and inhuman treatment against victims in violation of international law, treaties, and conventions including the Convention against Torture 1984, and the Geneva Conventions, including Geneva Convention III 1949.

The trial will be held before the Kuala Lumpur War Crimes Tribunal, which is constituted of imminent persons with legal qualifications.

The Tribunal will adjudicate and evaluate the evidence presented as in any court of law. The judges of the Tribunal must be satisfied that the charges are proven beyond reasonable doubt and deliver a reasoned judgement.

In the event the tribunal convicts any of the accused, the only sanction is that the name of the guilty person will be entered in the Commission's Register of War Criminals and publicized worldwide - the tribunal is a tribunal of conscience and a peoples' initiative.

The prosecution for the trial will be lead by Prof Gurdial S Nijar, prominent law professor and author of several law publications, and Prof Francis Boyle, leading American professor, practitioner, and advocate of international law, and assisted by a team of lawyers (by "War Is A Crime").

Related Topic(s): Afghanistan; Bush; CRIMINAL CONSPIRACY; Crime; Crimes Against Humanity; International; Iraq; Law; Peace; Peace; (more...) People Blair Tony; Torture; Trials; War Crimes, Add Tags  (less...)
Add to My Group(s)
Go To Commenting
The views expressed herein are the sole responsibility of the author and do not necessarily reflect those of this website or its editors.