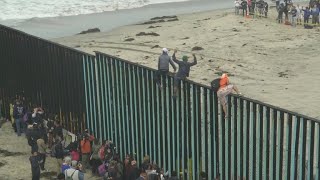 The wailing in our country about the "invasion of immigrants" has been long and loud. As one complainant put it...

"Few of their children in the country learn English...The signs in our streets have inscriptions in both languages...Unless the stream of the importation could be turned they will soon so outnumber us that all the advantages we have will not be able to preserve our language, and even our government will become precarious."

That's not some diatribe from one of today's Republican congress critters. It's the anxious cry of none other than Ben Franklin, deploring the wave of Germans pouring into the colony of Pennsylvania in the 1750s. Thus, anti-immigrant eruptions are older than the U.S. itself, and they've flared up periodically throughout our history, targeting the Irish, French, Italians and Chinese among others.

Even Donald Trump's current proposal to wall off our border is not a new bit of nuttiness -- around the time of the nation's founding, John Jay, who later became the first chief justice of the Supreme Court, proposed "a wall of brass around the country for the exclusion of Catholics."

Luckily for the development and enrichment of our country, these past public frenzies ultimately failed to exclude the teeming masses, and those uproars now appear through the telescope of time to have been some combination of ridiculous panic, political demagoguery and xenophobic ugliness. Still, this does not mean that the public's anxiety and simmering anger about today's massive influx of Central and South Americans coming illegally across our shared border is illegitimate. However, most of what the politicians and pundits are saying about it is illegitimate.

Which brings us to the wall, both figuratively and literally. The fact that we are resorting to the construction of an enormous fence between two friendly nations admits to an abject failure by policymakers, who are so bereft of ideas, honesty, courage and morality that all they can do is to try walling off the problem.

We've had experience here in Texas with the futility of tall border fences. Molly Ivins reported a beer-induced incident that took place in 1983. Walling off Mexico had been proposed back then by the Reaganauts, and a test fence had been built way down in the Big Bend outpost of Terlingua. This little town also happened to be the site of a renowned chili cook-off that Molly helped judge, and it attracted a big crowd of impish, beer-drinking chiliheads.

There stood the barrier, 17 feet tall and topped with barbwire. It didn't take many beers before the first-ever "Terlingua Memorial Over, Under, or Through the Mexican Fence Climbing Contest" was cooked up. Winning time: 30 seconds.

The Mexican government and people are insulted and appalled by the wall; ranchers, mayors, and families living on either side of the border hate it; environmentalists are aghast at its destructive impact on the ecology of the area. Still, it's being built.

The question that policymakers have not faced honestly is this one: Why do these immigrants come? The answer is not that they are pulled by our jobs and government benefits, but that they are pushed by the abject poverty and violence that their families face in their homeland. That might seem like a mere semantic difference, but it's huge if you're trying to develop a policy to stop the human flood across our border.

Until our leaders address the real issues, it's not possible to build a wall tall enough to stop them from coming.

Related Topic(s): Border Wall; Courage; Families; Immigration, Add Tags
Add to My Group(s)
Go To Commenting
The views expressed herein are the sole responsibility of the author and do not necessarily reflect those of this website or its editors.