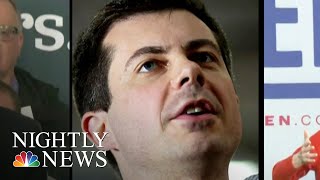 What can 24 hours in Iowa tell you about the political circus that is the 2020 election? A lot. You can start by hearing Iowans describe their values: that civic identity that they take great pride in. And you can contrast it to what the president's re-election campaign has put forth as its values, as seen in the medium that Trump knows best. Not political tradition, but Trump-branded campaign merchandise.

Let's start with the high road. Every state has its political vanities. So, it was no accident that one of the first events held Wednesday by Mayor Pete (Buttigieg), to make a closing argument for his long-shot candidacy, was in Independence, Iowa, at the Heartland Acres agricultural center and museum. The youngest Democratic presidential candidate is hoping that voters will be declaring their independence from candidates whose careers lay more in the past than in the future.

But it wasn't the eloquent Mayor Pete, but Dan Callahan, a county Democratic Party commissioner, who articulated the Iowan values that public-minded citizens can applaud. Callahan, who is from Independence, graduated from Independence High School, attended the University of Northern Iowa, joined the Iowa National Guard -- you get it -- praised Buttigieg's Iowan, and even Midwestern, values. You respect people. You treat people with dignity. You understand service. "That's what I am looking for in a president," he said, introducing you know who.

"We are now four days away from an historic Iowa caucus after a year of campaigning," said Buttigieg, moments later, who went on to remind a room of 150 voters (most were over 50) that no nominee who was not young, inspiring, forward-looking and not part of Washington's establishment (i.e., John Kennedy, Jimmy Carter, Bill Clinton and Barack Obama) had gone on to win.

Let's skip, for the moment, that Mayor Pete's venue could have held many more people had the conference center's folding walls been retracted. (Trump's Drake University arena rally was also relatively under-attended, the t-shirt vendors said, but we'll get to that in a bit.) The town meeting was as classic and cogent and substance-filled as a public forum could or should be.

"Some folks think I'm really far out on this, but I think, in the future, when we have elections for president, we should make sure the person who got the most votes actually gets to be president," he said, drawing claps. "And then you've got the role of money in politics, Citizens United, a [Supreme Court] decision that holds that a corporation has the same political soul as you and I do."

Voting Booth's reporter came to Iowa's Caucuses looking for how new technology is shaping the organizing, vote counting and spin, but we feel obliged to report other tidbits. Mayor Pete's mention of political soul now takes us to Trump.

Callahan would not have known it at the time he briefly spoke. But he laid down the moral tests (respect, dignity, service) that Vice President Mike Pence would also try to lay claim to in his gushing introduction of President Trump.

Pence is a former radio host. He knows the power of words and tight delivery. And he is very good at it. Not only did Pence claim, for Republicans and the president, flag, faith, family, country, patriotism, militarism, security, free speech, bearing arms, creating jobs, and, "in three short years, we made America great again," but his closing was perfectly synced with Trump's newest official merchandise.

After describing Trump as a fighter who has fought the left and mainstream media to serve real Americans, the vice president said, "Now, Iowa, it's our time to fight for him! It [the battle] is on!"

I'm not going to quote Trump. More notable than his smears ("Pocahontas," "Crazy Bernie," "Sleepy Joe," "Mini-Mike," etc.) or attack on Bernie Sanders ("America will not be a socialist country") were the slogans on his latest official t-shirt line. We are no longer in the era of red MAGA baseball hats.

Time and Trump marketing have marched on. The lines and attitude that brought the biggest cheers of the night were now available on piles of t-shirts and hats. If Trump has his way, the 2020 season will turn into a street brawl. For $20 a pop, your apparel could blare:

"Trump 45: IT AIN'T A MISTAKE SNOWFLAKE"

Steven Rosenfeld  covers democracy issues for AlterNet. He is a longtime print and broadcast journalist and has reported for National Public Radio, Monitor Radio, Marketplace,  TomPaine.com  and many newspapers. (more...)
Related Topic(s): 2020 Elections; Campaign Tactics; Caucus; Iowa Caucus; Voting, Add Tags
Add to My Group(s)
Go To Commenting
The views expressed herein are the sole responsibility of the author and do not necessarily reflect those of this website or its editors.