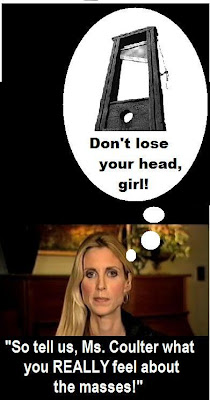 "The French Revolution, by contrast, they were just -- it was the revolt of the mob. That's why it's relevant to this book. It was just lunatics running around chopping off heads, sticking heads on -- on pikes and on guillotines. But they're often compared in this country." - Ann Coulter

People have always marveled at how Ann Coulter(geist) can remain cool and calm during the most harrowing of interviews. Of course, Fox doesn't count: she could be doing her nails, working on a crossword puzzle and eating fried chicken at the same time while answering their questions. But she knows when she's in a tough arena and she still looks as if she can withstand anything.

However, yesterday, Piers Morgan gave her an interview she'll never ever forget: Coulter almost trembled with rage and indignation, and you could see the abject hatred in her demeanor. Morgan only fleetingly covered the topic of her new book, Demonic. For Coulter, that sent up a red flag: Coulter does national interviews ONLY when she has a book to plug or an outrageous statement to put forth.

Most of the media have focused on how Coulter balked and ran from personal questions, as if someone asked her if she had hair plugs.* Morgan kept at her about her age, her engagements, etc. until she practically screamed that the rest of the interview would be a non-interview. But the right-wing bloggers lambasted Morgan for immediately getting into the heart of Coulter's book: "The demon is the mob, and the mob is demonic."

First, the topic was why Coulter had it in for every liberal. Admittedly, that was incredibly easy. But then, to gain steam, Morgan shifted slightly and got to the social spectrum and elicited a Coulter in full sail:

I mean, look at the debate over Social Security right now and Medicare and Medicaid. When these programs were started, they were started as Ponzi schemes. Their authors knew this can't last, but we'll be dead and gone by the time the bill comes due.

From there, the discussion covered economics, then came back to the heart of Coulter's ideologies: liberals are nothing but mob rule. Coulter explained her rationale through the works of Gustav Le Bon who coined the idea of "group think." Morgan pointed out, however, that Hitler and Mussolini had studied Le Bron.

PIERS MORGAN: Where is the similar mob to Mussolini's and Hitler's in the modern democratic era?

ANN COULTER: Well, I would say that there are a lot of similarities. The French Revolution.

COULTER: I believe you're insulting the Tea Partiers.

MORGAN: Well, they're not among the brightest of spellers, are they?

COULTER: They're smarter than any liberal.

It was then that Coulter began to look like a latter-day, media-savvy Marie Antoinette

Rev. Dan Vojir is has been writing/blogging on religion and politics for the better part of ten years. A former radio talk show host (Strictly Books " Talk America Radio Network) and book publisher, Dan has connected with some of the most (more...)
Related Topic(s): Ann Coulter; Hitler; Marie Antoinette; Mussolini; Piers Morgan; Republican Hypocrisy, Add Tags
Add to My Group(s)
Go To Commenting
The views expressed herein are the sole responsibility of the author and do not necessarily reflect those of this website or its editors.