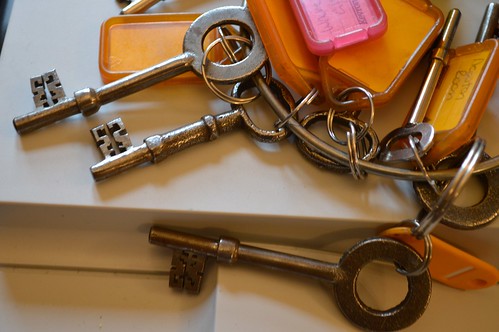 Keys
(Image by Matt From London)   Details   DMCA
In Pennsylvania, there are literally thousands of Democratic precinct captain/committee-person slots that are unfilled-- as many as 6000 of the 18,000 throughout the state. I'm pretty sure the same is true in most other states. That means that YOU could become a committee person and fill one of those slots.

Why do it? Because committee people also called precinct captains or leaders have a vote in Democratic politics. They can influence decisions by the party at the municipal, county and sometimes, even, state levels.

You can be appointed to one of those unfilled slots or you can run for the slot by getting ten petitions signed-- usually unopposed. It's simple. Contact the local Democrat Municipal chair and find out if there are committee people for your precinct. In Pennsylvania, about 40% are open, and a year or two ago, about 60% were open. Even if the seat is filled, you can run for it and with a little effort, win it from someone who supports the existing top-down system that rubber-stamps orders from the DNC.

Of course, there are some great people already working in some of those slots. But I'm sharing this because I didn't realize just how easy it is to get a seat at the table. If you want to find out if any slots in your precinct are open, find the local Democratic party leadership and ask them. I'm pretty sure that if you tell them you are interested, and a slot is open, they'll be thrilled to welcome you and help you get up and running.

This is a powerful, simple, relatively low effort way to gain 'keys' to the table. The rules may vary from one state to another, even from one county or voting district to another, but I am certain that this is a national situation. It offers an opportunity for you to help the national effort to take back the Democratic party from the corporate Dems who have been either running it or passively allowing it to be a party that does not serve the people.

Also, I imagine the same is true for the Republican party. Either way, it would be great if both corporate parties were taken back by people who care about the 99%.

Related Topic(s): Party Machine Democratic, Add Tags
Add to My Group(s)
Go To Commenting
The views expressed herein are the sole responsibility of the author and do not necessarily reflect those of this website or its editors.