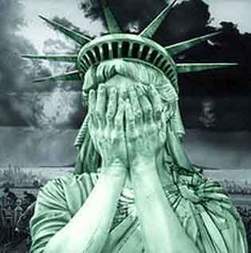 The following reflection somehow seems appropriate for the 4th of July when everyone is celebrating our Founding Fathers and our great democratic tradition.

The piece comes out of a family discussion that took place about three weeks ago. In the exchange, I ended up characterizing the detainment facilities for refugees and migrants attempting to cross our borders as "concentration camps." I was told in no uncertain terms that my comparison was inflammatory since it evoked inappropriate connections with Hitler's extermination camps -- an implied comparison that, for my conversation partners, was way "over the top." We have no extermination camps, they said.

From there the conversation spun to more detailed comparisons of the United States to Hitler's Third Reich and to what I and so many others perceive as a return of fascism, which I connected with capitalism. Once again, my observations were dismissed as wildly exaggerated, too general and jumping all over the place, bringing up issues not germane to the topic at hand. Besides to capitalism, my references were to Iraq, Yemen, police brutality, xenophobia. . .

All of that drove me to compose the following essay more for myself than for anyone else -- to clarify my own thought. To repeat, it seems appropriate for publication here on this 4th of July.

Hitler Redivivus: How He Has Returned Triumphant in the Person of Donald Trump

Let me begin this piece on the contemporary return of fascism with an "easy essay" I wrote back in 1993. Today, the essay's description of the triumph of "Hitlerism with Hitler" is proving far more prescient than I realized in the moment of its composition. Its form follows the spirit of Catholic Workers' co-founder, Peter Maurin, who invented the poetic "easy essay" genre when he wrote for the Catholic Worker newspaper which he founded with Dorothy Day.

This particular imitation of Maurin's style references Marge Schott, an infamous admirer of Adolph Hitler. Schott is the deceased owner of the Cincinnati Reds baseball team. She was a racist and collector of Nazi memorabilia. Besides disdaining some of her players as "n-word millionaires," she once famously said that Hitler was originally "a good guy," until he "went too far."

As you'll see, the essay is about Ms. Schott's hero and how he and the system he embodied actually did win World War II and has reincarnated today in thinly disguised form. That is, Hitlerism with its fascism, concentration camps, and genocide have in this era of Donald Trump more evidently returned to our world than seemed possible to most 25 years ago when I first published my own easy essay.

For starters though, here's the Maurin-inspired piece as I originally wrote it:

Hitler, Bonhoeffer, Jesus and Us
(An "Easy Essay" with apologies to the memory of Peter Maurin and thanks to Marge Schott)

Following Germany's defeat
in "the First Inter-Capitalist War,"
the system was in trouble in das Vaterland.
It also foundered world-wide
after the Crash of '29.
So, Joseph Stalin
convoked a Congress of Victory
to celebrate the death of capitalism
and the End of History --
in 1934.

Roosevelt called it a "New Deal;"
Hitler's term was "National Socialism."
Roosevelt used worker discontent
with their jobs and bosses
to get elected four times.
Meanwhile, Hitler successfully directed worker rage
away from the Krupps and Bayers
and towards the usual scapegoats:
Jews, communists, gays, blacks, foreigners and Gypsies.

He admired the American extermination of "Indians"
and used that model of starvation and internment
to guide his own program for eliminating undesirables
by hunger and concentrated slaughter.
Hitler strictly controlled national unions,
thus relieving the worries of the German elite.
In all of this,
he received the support of mainline churches.
Pius XII even praised der Fuhrer as
"an indispensable bulwark against communism."

Dietrich Bonhoeffer and the German "Confessing Church"
resisted Hitler's program
of social Darwinism, patriotism and persecution of the undeserving.
Confessing faithful were critical of "religion"
which combined anti-Semitism, white supremacy, patriotism and xenophobia
with selected elements of Christianity.
They insisted on allegiance
to Jesus alone
who stood in judgment over soil, fatherland, flag and blood.
They even urged Christian patriots
to pray for their country's defeat in war.
Bonhoeffer participated in a plot to assassinate Hitler
and explored the promise of
Christianity without "religion."

Related Topic(s): Fascism; Genocide; Hitler; Independence Day; Nazis; Patriotism, Add Tags
Add to My Group(s)
Go To Commenting
The views expressed herein are the sole responsibility of the author and do not necessarily reflect those of this website or its editors.