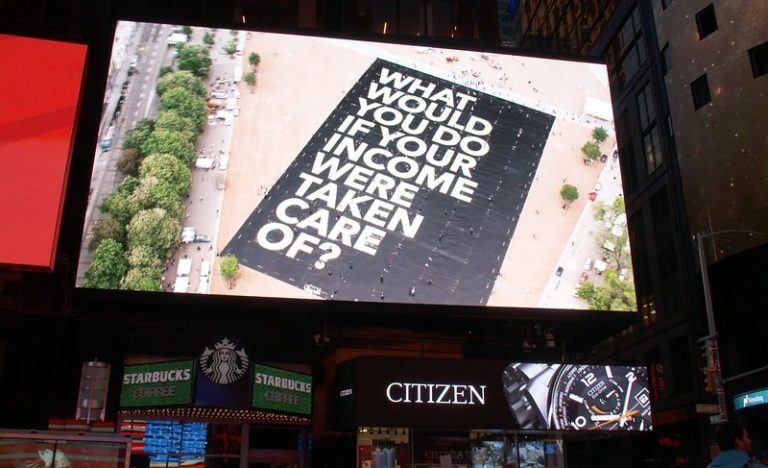 According to an April 6 article on CNBC.com, Spain is slated to become the first country in Europe to introduce a universal basic income (UBI) on a long-term basis. Spain's Minister for Economic Affairs has announced plans to roll out a UBI "as soon as possible," with the goal of providing a nationwide basic wage that supports citizens "forever." Guy Standing, a research professor at the University of London, told CNBC that there was no prospect of a global economic revival without a universal basic income. "It's almost a no-brainer," he said. "We are going to have some sort of basic income system sooner or later..."

"Where will the government find the money?" is no longer a valid objection to providing an economic safety net for the people. The government can find the money in the same place it just found more than $5 trillion for Wall Street and Corporate America: the central bank can print it. In an April 9 post commenting on the $1.77 trillion handed to Wall Street under the CARES Act, Wolf Richter observed, "If the Fed had sent that $1.77 Trillion to the 130 million households in the US, each household would have received $13,600. But no, this was helicopter money exclusively for Wall Street and for asset holders."

"Helicopter money" -- money simply issued by the central bank and injected into the economy -- could be used in many ways, including building infrastructure, capitalizing a national infrastructure and development bank, providing free state university tuition, or funding Medicare, social security, or a universal basic income. In the current crisis, in which a government-mandated shutdown has left households more vulnerable than at any time since the Great Depression, a UBI seems the most direct and efficient way to get money to everyone who needs it. But critics argue that it will just trigger inflation and collapse the dollar. As gold proponent Mike Maloney complained on an April 16 podcast:

"Typing extra digits into computers does not make us wealthy. If this insane theory of printing money for almost everyone on a permanent basis takes hold, the value of the dollars in your purse or pocketbook will ... just continue to erode... I just want someone to explain to me how this is going to work."

Having done quite a bit of study on that, I thought I would take on the challenge. Here is how and why a central bank-financed UBI can work without eroding the dollar.

In a Debt-Based System, the Consumer Economy Is Chronically Short of Money.

First, some basics of modern money. We do not have a fixed and stable money system. We have a credit system, in which money is created and destroyed by banks every day. Money is created as a deposit when the bank makes a loan and is extinguished when the loan is repaid, as explained in detail by the Bank of England here. When fewer loans are being created than are being repaid, the money supply shrinks, a phenomenon called "debt deflation." Deflation then triggers recession and depression. The term "helicopter money" was coined to describe the cure for that much-feared syndrome. Economist Milton Friedman said it was easy to cure a deflation: just print money and rain it down from helicopters on the people.

Our money supply is in a chronic state of deflation, due to the way money comes into existence. Banks create the principal but not the interest needed to repay their loans, so more money is always owed back than was created in the original loans. Thus, debt always grows faster than the money supply, as can be seen in this chart from WorkableEconomics.com:

When the debt burden grow so large that borrowers cannot take on more, they pay down old loans without taking out new ones and the money supply shrinks or deflates.

Critics of this "debt virus" theory say the gap between debt and the money available to repay can be filled through the "velocity of money." Debts are repaid over time, and if the payments received collectively by the lenders are spent back into the economy, they are collectively available to the debtors to pay their next monthly balances. (See a fuller explanation here.) The flaw in this argument is that money created as a loan is extinguished on repayment and is not available to be spent back into the economy. Repayment zeros out the debit by which it was created, and the money just disappears.

Another problem with the "velocity of money" argument is that lenders don't typically spend their profits back into the consumer economy. In fact, we have two economies -- the consumer/producer economy where goods and services are produced and traded, and the financialized economy where money chases "yields" without producing new goods and services. The financialized economy is essentially a parasite on the real economy, and it now contains most of the money in the system. In an unwritten policy called the "Fed put," the central bank routinely manipulates the money supply to prop up financial markets. That means corporate owners and investors can make more and faster money in the financialized economy than by investing in workers and equipment. Bankers, investors and other "savers" put their money in stocks and bonds, hide it in offshore tax havens, send it abroad, or just keep it in cash. At the end of 2018, US corporations were sitting on $1.7 trillion in cash, and 70% of $100 bills were held overseas.

Meanwhile the producer/consumer economy is left with insufficient investment and insufficient demand. According to a July 2017 paper from the Roosevelt Institute called "What Recovery? The Case for Continued Expansionary Policy at the Fed":

"GDP remains well below both the long-run trend and the level predicted by forecasters a decade ago. In 2016, real per capita GDP was 10% below the Congressional Budget Office's (CBO) 2006 forecast, and shows no signs of returning to the predicted level."

The report showed that the most likely explanation for this lackluster growth was inadequate demand. Wages were stagnant; and before producers would produce, they needed customers knocking on their doors.

Related Topic(s): Bankers; Banks; China; Financial; Income Inequality; Investors; Universal Basic Income; Work; Yuan, Add Tags
Add to My Group(s)
Go To Commenting
The views expressed herein are the sole responsibility of the author and do not necessarily reflect those of this website or its editors.