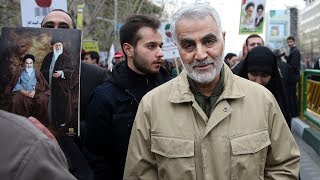 It's time for Americans to grow up and smell the coffee. The president of the United States answers, to an unprecedented extent, to the president of the Russian Federation. That may change at some point in the not too distant future. However, at this stage Vladimir Putin has a great deal to say about US foreign policy. For now, that might not be a bad thing.

Given Donald Trump's child-like, tantrum-driven, self-serving exploitation of US national security and military affairs for his own political interests, someone has to play the role of grownup on the world stage, and that vacuum may well be filled by Putin.

To the point, it's not likely that Putin does want the US at war with his longtime ally Iran. Both Russia and Iran are subject to US-coordinated sanctions. Those sanctions are economically damaging to both countries and form the basis for the Russian-Iranian partnership. The sanctions force Russia and Iran into a strategic and economic alliance.

The Iranians will not stand for the killing of Qassem Soleimani. They absolutely will retaliate. People are going to die. How they react, what kind of operation they undertake will be key to the scope of the escalation.

Putin is positioned between Donald Trump and the Iranians. A full-blown war between the US and Iran would likely do severe damage to Putin's broader Middle East strategy. Putin would like to see a diminished US role in the Middle East and on the world stage as a whole. But if that means seriously destabilizing one of Russia's last remaining major economic and strategic partners, he is not likely to remain unengaged.

It is more likely that Putin will work in the background to defuse tensions between the US and Iran. Should he succeed, it could significantly elevate his standing internationally and particularly among Western leaders. The stakes are high for Putin, Russia, the US, and Iran.

All-out war with Iran might well damage all three countries severely. Putin has a significant, perhaps even an outsized influence on the decision-making process of both nations. For Putin, an opportunity now presents itself.

Related Topic(s): Dogs Of War; Donald Trump; Iran; Putin; Sanctions; Strategy; Trump Russia Connection, Add Tags
Add to My Group(s)
Go To Commenting
The views expressed herein are the sole responsibility of the author and do not necessarily reflect those of this website or its editors.