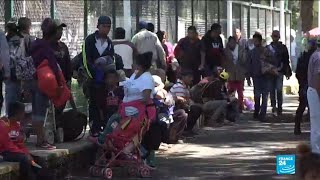 To dramatically slow the flow of illegal immigration and even end it does not rest on building walls or sending troops to the border, or by heartlessly snatching children from their mothers' arms, or by incarceration, deportation, or prosecution. A big part of the answer lies in economic development, mainly sustainable development projects, in the migrant's country of origin. Indeed, instead of building walls, we need to build the kind of bridges that can change the lives of other people for the better and give them hope. After all, the political destabilization in Central American countries was in part, if not to a great extent, precipitated by the United States, which makes America even more morally responsible to do something about it.

Beyond that, abject poverty and hopelessness breeds resentment and despondency and leads to gang violence and extremism, which is only the natural outcome of these subhuman conditions. Little will change unless the people, especially the youth, are given an opportunity to live a normal and productive life, develop a sense of belonging, and have vested interests in their work and self-worth.

The plight of three Central American countries tells the story behind the influx of immigrants flocking to our country from these and other countries.

Honduras is Central America's second-poorest country. More than 60 percent of the population lives in poverty, and it has one of the highest levels of economic inequality in Latin America. Poverty in Honduras is chiefly due to rampant crime, violence, political instability, corruption, and a significant susceptibility to hurricanes and droughts.

Guatemala has the largest economy in Central America, but despite recent growth, economic inequality and poverty have increased, particularly among the rural indigenous population. Malnutrition and maternal mortality rates are among the worst in Latin America, especially in indigenous areas. More than half of the population lives below the poverty line.

El Salvador has one of the lowest economic growth rates in Central America. Since the end of the civil war in 1992, the country has made progress in terms of political and social development, but high rates of crime and violence continue to threaten these gains. El Salvador is also vulnerable to adverse natural events, which is only made worse by extreme climate change.

In these countries, rural poverty places great stress on cities and ultimately propels immigration, and as long as it does, the enormous economic and political instability that it creates will continue.

Trump's demand of $20 billion to build a wall along the Mexican border is misguided, impractical, and a waste of precious resources that can change the lives of millions of people if invested wisely in these poverty-stricken countries. Does Trump know how cost effective it is to promote people's projects within the country of origin?

A fraction of $20 billion would change the socio-economic conditions in these countries. One billion dollars invested in economic development projects can provide food, drinking water, jobs, self-empowerment, and hope for better life for a million poor, displaced, and despairing people.

According to Dr. Yossef Ben-Meir, President of the High Atlas Foundation in Morocco and a 20-year veteran in sustainable development, a $100,000 investment can establish a women's co-operative of approximately 50 members benefiting approximately 300-350 people. "The outstanding investment needed ends up being a relatively small proportion of the cost the nations that receive or repel migrants incur."

In Guatemala, for example, an organization working on family planning in 2017 alone prevented over 14,000 unwanted pregnancies, 95 child deaths, and six maternal deaths, all with only $880,000.

It has unequivocally been shown that would-be immigrants strongly prefer to stay in their home communities if only their basic needs are met and there exist opportunities for growth. They will work hard to ensure the sustainability of projects they choose and develop vested interests in their implementation and outcomes.

It should be noted that the principle of economic development is the same, be that in countries in South America or Africa; only the nature and the type of project differs from one country or community to another, depending on their special needs. Here is where we must invest, to give people a chance not only for their sake but ours as well, because America flourishes when other people in far lands flourish too.

Economic investments and the implementation of sustainable development projects doesn't mean that all illegal immigration will stop. We still need a comprehensive immigration policy consistent with our tradition of receiving migrants with open arms -- a sensible and companion-ate policy that governs all aspects of migration to America.

Related Topic(s): Children; Citizenship; Dreamers; El Salvador; Guatemala; Honduras; Immigrants; Poverty, Add Tags
Add to My Group(s)
Go To Commenting
The views expressed herein are the sole responsibility of the author and do not necessarily reflect those of this website or its editors.