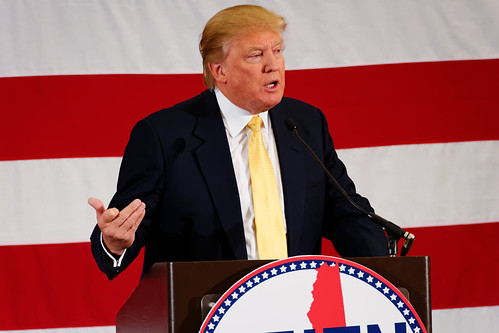 Editor's Note: Wherein the author posits an important question for the American left: is Trump a genuine fascist, a proto-fascist or some other type of authoritarian? Is Trump's following chiefly composed of racists? And, finally, is a racist identical to a fascist, and does it matter in the current situation? And finally, isn't the Clintonian wing of the Democratic party equally ready to implement fascism as a "solution" to the structural crisis of global capitalism? If so, what's the difference? Depending on the answer, anti-fascists can tailor their responses. Here's Dr Jonas' analysis:

Looking back through my files, I have discovered that I have been writing about Trump, Trumpism, and the Trumpites for quite some time, going back to the old, independent, BuzzFlash in a column that appeared on April 28, 2011.

In this column, I am briefly reviewing my Trump columns that have appeared on The Greanville Post, under my general heading "The Duopoly Watch." Not too many observers, including myself, thought he could win the Presidency. But hindsight is 20/20.

Now, given the strength of his combination of bringing out into the open the Repubs' traditional racism, Islamophobia, xenophobia, and misogyny, and the many weaknesses of the Democratic Party and its candidate, it seems almost inevitable. So, this column presents something of a time-line following the development of Trumpism along, to the present, where we face the imposition of a 21st century form of fascism on our nation. That its putative leader was elected by a minority of the voting public, just as Hitler was (indirectly in that case), is no accident.

"Over four years ago, on BuzzFlash, I published a column on Donald Trump entitled "Trump is the Race Card." Yes, Trump is a blowhard, and no he doesn't have any real programs to offer that would have a chance of solving the problems he likes to list (some real; some imagined. His new [old by Repub. standards] "immigration" policy is a bad joke [see below]). But like just about every other political commentator on our side around, I still find it irresistible to launch broadsides at him."

2. The next one, on Oct. 2, 2015, was "Hair Trump or Herr Trump?" At the beginning of that one I noted that: "The Web is suddenly crawling with images of Trump as Hitler -- the idea has apparently caught on. To what extent this is the weight of the establishment attempting to quash Trump as an unwelcome messenger is anybody's guess at this time." The column explores the historical similarities, as they were apparent in Trump's case at the time, between himself and his movement and Hitler's, and the differences as well.

3. On Armistice Day (now called Veterans' Day), 2015, I began a discussion of "Fascism in the 21st Century, considering, in Part I, "Briefly, Its 20th Century Background." In that column I presented my own, brief definition of the term, drawn from my own work, (see esp. Appendix II), and of course many other sources. It is:

"A politico-economic system in which there is: total executive branch control of both the legislative and administrative powers of government; no independent judiciary; no Constitution that embodies a Rule of Law standing above the people who run the government and the executive, legislative and judicial bodies through which they do so; no inherent personal rights or liberties; a single national ideology that first demonizes and then criminalizes all political, religious, and ideological opposition to it; the massive and regular use of hate, fear, racial and religious prejudice, the Big Lie technique, mob psychology, mob actions and ultimately individual and collective violence to achieve political and economic ends; a capitalist/corporate economy; with the ruling economic class' domination of economic, fiscal, and regulatory policy."

4. I then continued the discussion: "Fascism in the 21st Century: Part II, A 21st Century Adaptation." It describes how the Republican Party in general and Trump in particular have been tailoring the essential components of the fascist system, without of course using the term, to their own 21st century needs and the realities of the time.

5. On December 15, 2105, I demonstrated how this has been done by the Repubs. over time and now picked up and writ large by Trump in "Trump, the Right-Ward Imperative, and the Republican Party."

6. On May 12, 2016, I wrote about "How the DLC Democrats Helped to Make Donald Trump, Presidential Candidate." And by making the FDR/LBJ-before-Viet-Nam party into a moderate right-wing party under the Clintons, et al, they did.

7. On June 16, 2016, I considered how the Trumpite/Repub. response to the Orlando Pulse night club mass-murder solidified their identification as the Party of Hate, in "Orlando, Trump, Identity-Group-Hate-Politics, and the Republican Party."

8. By June 21, I had come to the conclusion that Trump had definitely turned the corner towards true fascism, as defined above, because he had acquired his first significant economic ruling class support, in "Donald Trump: Turning the Corner Towards Fascism (But First Let's Define It)." In it I reiterated my position that we certainly can correctly use the terms "fascism" and "fascists" in relation to Trumpism, the Trumpites, and their supporters within the contemporary "mainstream" Republican Party.

9. On September 14, 2016 I began a two-part series on how, given the rapidly accelerating decline of the effectiveness of the capitalist mode of production in the United States (and elsewhere as well, of course), that fascism would eventually come here, Trumpism and the Trumpites, or not... In the second part of that series, I posed the question as: "Do You Want Fascism to Come to the U.S. Sooner, or Later?"

10. Just after the election, on November 14, in "Racism -- Aided by Democrats' Numerous Betrayals -- Wins Again: The Duopoly at Work," I returned to the theme of Trump's underlying racism and how it was one of the major keys to his winning the election. (And how ironic it is that he won the position because of the existence in the Constitution of the Electoral College, originally emplaced there primarily to help the original slave states protect their human property and property rights, an ideology based on the Doctrine of White Supremacy.)

11. Finally (for 2016) there was my most recent column for "The Greanville Post: The Duopoly Watch," "Trump and the Ruling Class." In it, I defined the term "ruling class" as:

"...that collection of owners, high-level administrators, and bankers/financiers that controls the major structure and functions of the economy of a nation, and through the exertion of various forms of power (including force when necessary), its political structure and functioning as well. In the modern industrial world, for the most part they do this through the mechanism of political parties and elections."

I noted that the economically dominant sector of the U.S. class, manufacturing, fossil fuels, military-industrial complex, big pharma/agricultural/retail, and etc. has not had full control of State Power in the U.S. since the end of the Hoover Administration. They've got it now and they've got a 21st century fascist at the head of it.

Next comes the development of the Resistance. We, and many others of course, will be following that with great interest, as well as taking part in its development.

Steven Jonas, MD, MPH, MS is a Professor Emeritus of Preventive Medicine at StonyBrookMedicine (NY) and author/co-author/editor/co-editor of over 35 books. In addition to his position on OpEdNews as a "Trusted Author," he is a Senior Editor, (more...)
Related Topic(s): Fascism; Misogyny; Trump Presidency; Xenophobia, Add Tags
Add to My Group(s)
Go To Commenting
The views expressed herein are the sole responsibility of the author and do not necessarily reflect those of this website or its editors.