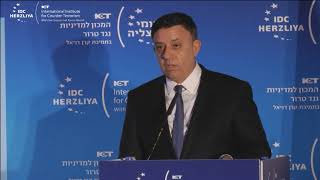 SUDDENLY, A terrible thought struck me. What if Avi Gabbay really believes what he is saying?

Impossible. He cannot really believe all those things. No, no.

But if he does? Where does that leave us?

AVI GABBAY is the new leader of the Israeli Labor Party. Until recently, he was a founding member of a moderate right-wing party, Kulanu ("We all"). Without ever being elected to the Knesset, he served as a junior minister. He resigned when Avigdor Lieberman, considered by many as a semi-fascist (and the "semi" is far from certain), was allowed to join the government as Minister of Defense, the second most important post.

In a bold move, Gabbay left Kulanu and joined the Labor Party (also known as "the Zionist Camp") and was soon elected its chairman. However, he did not become the official "Leader of the Opposition," because he was not a member of the Knesset. (The formal title remained with his predecessor, the very nice but rather insignificant Yitzhak Herzog.)

One of Gabbay's outstanding qualities is the fact that he is "Oriental," an Eastern Jew. He is the seventh of eight children in a family that immigrated from Morocco in 1964, just three years before his birth.

This is very important. The Labor Party is decried as "Western" (or Ashkenazi), the party of the social elites, estranged from the mass of the Orientals. It must overcome this characterization if it ever wants to attain power again.

In the Likud Party, the situation is the exact opposite. The mass of Likud voters are Orientals, but Binyamin Netanyahu is as Ashkenazi as you can get. The Orientals adore him, as they have never adored any Oriental leader.

BUT GABBAY'S origin is not his only attribute. From his humble beginnings he climbed the heights of economic success. He became the CEO of one of Israel's most important corporations, amassing a personal fortune on the way.

He is not a charismatic leader, not a person to arouse the masses. Indeed, his face is easily forgotten. But he took with him from the business world a sound, logical way of thinking. In politics, logic is a rare commodity. It can be obstructive.

The question now is: where does logic take him?

DURING HIS few months as leader of the Labor Party, Gabbay has deeply shocked many party members. Shocked them to the core.

About once a week, usually on Shabbat, Gabbay lets loose a statement that seemingly contradicts everything the party has stood for during its more than 100 years of existence.

He once declared that peace does not mean that any of the many dozens of settlements in the occupied territories must be removed. Until then, the party line was that only the "settlement blocs" -- located hard on the Green line - could remain, within the framework of an agreed exchange of territories, and that all the others must be removed. Gabbay's announcement caused quite a stir, since it probably makes the "Two-State solution" impossible.

Related Topic(s): Arab; Israel; Knesset; Likud; Politics, Add Tags
Add to My Group(s)
Go To Commenting
The views expressed herein are the sole responsibility of the author and do not necessarily reflect those of this website or its editors.