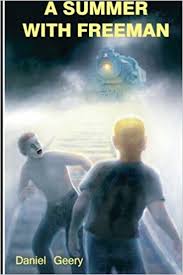 Dan Geery's first novel, A Summer with Freeman, is terrific book -- so well written. Its sparkling and hilarious prose seemed like the work of a veteran novelist, not that of a first timer. The dialog is funny and realistic. And the whole story about fourteen-year-old Joey Simpson and his first summer with a new friend, fifteen-year-old Freddie Freeman, made me recall my own coming of age as I'm sure it does for most of Dan's readers. This is movie-quality work.

Set in the 1950s, the book has all the elements most of us recall:

For me, the most unforgettable moments included:

I must admit that I once tried my hand at writing book-length fiction. And, according to my guide, Writing a Novel and Getting it Published, it transformed me into a successful novelist at least according to the book's definition. It said a successful novelist is "any writer who has completed a project generally recognizable as a novel." By those standards, yes: I made it. However, that's where my success concluded. My novel turned out to be stodgy, moralistic, and filled with "telling" rather than "showing."

Daniel Geery's first novel, A Summer with Freeman, has none of that. It's a rollicking read and an evocative entertaining tale that will have you smiling, if not laughing, from beginning to end.

Related Topic(s): Books; Catholic; Novel; OEN; Writing, Add Tags
Add to My Group(s)
Go To Commenting
The views expressed herein are the sole responsibility of the author and do not necessarily reflect those of this website or its editors.