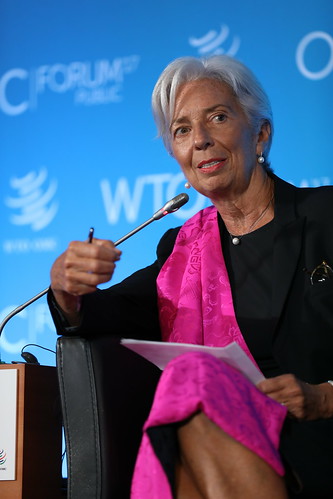 Christine Lagarde just quit her top post at the International Monetary Fund in order to run the European Central Bank. This shows just how far the euro has come (and central bankers), and represents either a historic step backwards or a leap of faith forward in the fight against the global domination of the US dollar.

The dollar's dominance is what allows Washington to impose murderous, illegal sanctions on countries like Iran, Cuba, Korea and elsewhere, which is why many are so keen to end it.

The dollar's imposition began after World War II, when the war-ravaged powers were forced to accept equating US paper with (but actually above) gold, a move which Charles de Gaulle bitterly referred to as the "exorbitant privilege" of the United States. The logic is simple: a $100-dollar bill cost Washington only the price of a piece of paper, whereas everyone else still had to mine, barter, earn or steal $100 worth of gold (or its equivalent in goods) to acquire that banknote.

The expensive US failure in Vietnam caused Richard Nixon to end this policy in 1971, but Quantitative Easing (QE) - printing money out of thin air - was opposed back then, so a replacement tool had to be quickly found in order to maintain US empire. The solution to effectively maintain the Bretton Woods system was found with the "petrodollar" agreement of 1973: every barrel of Saudi oil sold to anyone had to be purchased in dollars, and surplus Saudi profit would be invested in US banks and in US debt securities ("petrodollar recycling", per Henry Kissinger).

Washington had no qualms about propping up the ruthless, reactionary House of Saud to maintain US economic hegemony. The system expanded to other oil producers to the point where: no dollars? No oil.

The petrodollar keeps money flowing into the US and allows the US to "print gold" - it finances their huge budget deficits, high demand for the dollar fights off their inflation, it gives their banks a source of income for which they do zero genuine work, and the US themselves can buy "as much oil as they can print" from the Saudis. This is obviously a tremendous bargain for the US - the only reason the Saudis accept it is because they know they have absolutely zero legitimacy and would be deposed instantly without US arms and military support.

But the great deal is only for some in the US, as they are rabid neoliberal capitalists: from 1980 onwards the US elite funneled these huge monies into Wall Street and other asset classes which only their fellow elite can touch, as opposed to intelligently and patriotically using the income to improve the overall conditions of their own nation, or even just raising wages (neoliberals call these concepts "socialism").

Pick your poison: the US or the IMF?

The IMF, which is always led by a European, has long-pushed something to end this scam that weakens everyone for the US' benefit, via the concept of the SDR (special drawing rights): a basket of international currencies which could replace the dollar as the world's backing currency. Who needs the Fed when the SDR can provide international liquidity and financial stability? It wasn't a great system, but it was closer to the IMF's original aim of having an international monetary system, instead of the current US empire system of (petrodollar) tribute, which is no different from the Roman era.

The Great Recession pushed the superiority of the SDR to the fore - in 2009 China publicly supported, for the first time, that an international reserve currency be based on the SDR and be run by the IMF. The immorality and business failures of US bankers caused the Great Recession - it was only logical that the Americans lose their banking primacy.

The IMF was thus poised to become top banker, and one of their own was even about to be democratically elected.

In 2011 then-current IMF chief Dominique Strauss-Kahn, a major backer of the SDR basket, was outpolling Nicolas Sarkozy 2 to 1 to head the world's 5th-largest economy and the neo-imperialist master of North and West Africa. He was certain to win, but on American soil he was accused of attempted rape of a hotel maid, dooming his presidency. The charges were dropped, but Strauss-Kahn admitted the liaison. People screamed "conspiracy" - I always found it highly coincidental that Strauss-Kahn found a maid whose native language was French in a country where seemingly all the cleaning women are Latinas? Conspiracy theorists assumed Sarkozy was behind it, with few noting how the IMF, the SDR and Strauss-Kahn threatened US economic hegemony.

The US pushed back the IMF with one arm while the other arranged the current global financial regime - Quantitative Easing.

QE has been a total failure for the average person worldwide, but nowhere more so than in Europe. Incredibly, 1.5 years after it became official, Press TV and I remain one of the very few people to write about the statistical reality of Europe's "Lost Decade". I saw it happening in painful slow-motion, being Press TV's chief correspondent in Paris.

Related Topic(s): Dollar, Add Tags
Add to My Group(s)
Go To Commenting
The views expressed herein are the sole responsibility of the author and do not necessarily reflect those of this website or its editors.