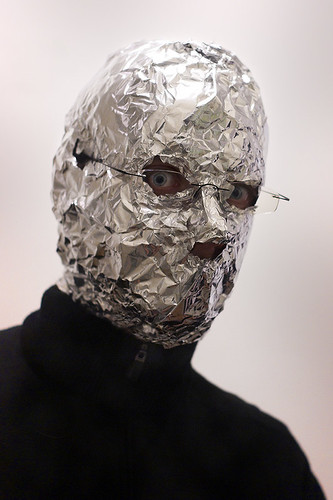 Just because you're paranoid
(Image by -RobW- from flickr)   Details   DMCA

I. Is It Something I Thought?

There are places out of control. You'll see.

Where they have gizmos that read "alpha waves,"

and thoughts are confronted, all of them. We

They're beasts with machine brains, who don't listen;

who desecrate humanity and laugh

at language, dark shades that seem to glisten,

They promise pain night and day, and bring it,

sanctioned by a subculture of violence

that salutes another's flag and sing it;

bring death squad dogs to snarl, as by sixth sense.

I have glimpsed the coming days of horror,

the new and improved Frankenstein Fuhrer.

You'll know them by their ashen faces worn

not Spock's but think Roy Thinnes. And the scorn

in their eyes mirrored in yours: someone play Taps.

Be careful, a scourge may pop from their pot

at any moment, an alien eye,

you knew (you majored in it!) seem to lie.

By all rights the UN should be called in;

these Little Big Men rounded up, hauled in.

Sontag sang of disease as metaphor;

she thought the response to 9/11

and "we" turned on her. Why won't she leaven

her sparks in these days of Willy Loman?

She's everything "we" hate in a woman,

Just as well she never made it to Now --

out there, in here, seeds sold for an old cow,

and plenty of Jack-in-the-Beanstalk fear.

Word is, consciousness came from a virus;

the brain as hieroglyphic papyrus.

IV. The Thaw Is On

All the old bugaboos are rising up --

to full moons that look like them, five o'clock

Sure, maybe I'm just all bent out of shape

from howling monster voices in my head --

Terminator muscle men on the take.

Yes, viruses are on their way back home,

But they were obnoxious rapists, buffoons,

long before they became stuffed loveables

who saved us from our tragic illuges.

Now, God's dead, and after we gave him

He's not coming back to this hood soon. Doff

your cap and RIP. Hail to baal fascism!

"Nietzsche was here" -- scratched on a toilet wall.

Damn, there's no comfort paper in the stall!