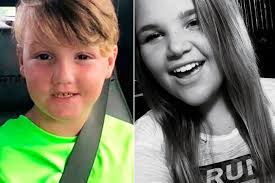 Suppressing our God-given reason in order to believe in the "revelations" of any religion sets a dangerous precedent to further suppress our innate God-given reason. This is what was an essential element in the murder of seven-year-old Joshua "JJ" Vallow and his sister, 17-year-old Rylee Ryan (pictured above).

The children's mother and stepfather, Lori Vallow Daybell and Chad Daybell, were raised in the Church of Jesus Christ of Latter-day Saints (Mormon). In order to accept the nonsense of Mormonism, they had to suppress their gift from God of innate reason. Mormonism teaches, as does mainline Christianity, that Jesus is the Son of God who was crucified for our sins and who rose from the dead. You cannot accept these basic Christian claims if you use your God-given reason. The Daybells, like all Christians and Mormons, suppressed their God-given reason to believe this nonsense. They traded their gift from God for myths from men, as do all followers of the "revealed" religions.

As Mormons, the Daybells also accepted the false belief that the founder of Mormonism, Joseph Smith, received Divine revelations in the form of Divine visitations, when, according to Smith, God and Jesus appeared to him and gave him Divine revelations, and, shortly after that, an angel allegedly showed him the location of where golden plates with the Book of Mormon written on them were located. This is all irrational nonsense. It cannot be believed while you are allowing your reason to function. (For an in-depth look at Mormonism written by a former Mormon high priest who left Mormonism for Deism, click here.)

In order to prepare for the return of Jesus, the Daybells believe God wants them to gather the 144,000 people mentioned three time in the Book of Revelation (Revelation 7:3-8; 14:1; 14:3-4) in order to form the Church of the Firstborn. They also believe that people have past lives lived on Earth and on other planets. Chad Daybell believes he was Jesus' brother, James the Just.

The Daybells also believe that evil spirits can push someone's spirit out of their body, and take over that person's body. When this happens, that person, according to the belief of the Daybells and their followers, becomes a zombie. They believe God wants them to kill zombies in order to prepare for the return of Jesus. The Daybells said Lori's children, JJ and Rylee, had become zombies. These innocent children were then murdered, based on this superstition. Police located their remains in the backyard of Chad Daybell's home.

The Daybells are people of faith. They have suppressed their gift from The Supreme Intelligence/God of innate reason in order to believe and accept on faith the nonsense in the Bible and in the Book of Mormon. They then started to believe in other nonsensical superstitions derived from the Bible and Book of Mormon. Their value of faith over God-given innate reason caused the irreversible, and very real, tragic deaths of JJ and Rylee.

The Deist Thomas Jefferson pointed out the danger of faith in his letter to James Smith in 1822. Jefferson wrote:

. . . man, once surrendering his reason, has no remaining guard against absurdities the most monstrous, and like a ship without rudder, is the sport of every wind. With such person, gullibility which they call faith, takes the helm from the hand of reason, and the mind becomes a wreck.

Jefferson also pointed out that the Bible's Book of Revelation, which is of great importance to the Daybells and to many other faith-based people, was written by a "maniac" and that:

I do not consider them as revelations of the Supreme Being, whom I would not so far blaspheme as to impute to Him a pretension of revelation, couched at the same time in terms which, He would know, were never to be understood by those whom they were addressed.

Bob Johnson is a paralegal and a freelance writer in Florida. He was raised Roman Catholic, but after reading Thomas Paine's The Age of Reason, he became a Deist. In 1993 he founded the World Union of Deists and in 1996 he launched the first web (more...)
Related Topic(s): Belief; Christianity; Death; Deism; Evil; Faith; God; Gullibility; Jesus; Parents; (more...) Religion; Spirit; Teaching, Add Tags  (less...)
Add to My Group(s)
Go To Commenting
The views expressed herein are the sole responsibility of the author and do not necessarily reflect those of this website or its editors.