The term Invincible Defence Technology (IDT) has been around for some time now. Based on what is termed The Maharishi Effect, IDT takes Unified Field Science to the next level of popular consciousness. The scientific proof of its viability is strong enough to warrant further investigation.

In the 1960's a bearded man from India popularised Transcendental Meditation (TM) in the world, especially through The Beatles. It turned out to be a very popular way for people to reduce stress and to make significant positive changes in their lives. The man in question, Maharishi Mahesh Yogi, predicted that a small element of individuals meditating together could ensure the absence of conflict and a dramatic lowering of crime rates in the larger social group they represented. Skepticism was soon replaced by awe when scientific trials started to prove that this was indeed possible. 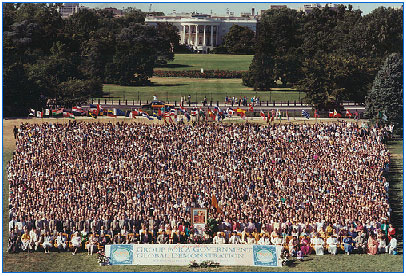 (Image by Unknown Owner)   Details   DMCA
The group of about 4000 who tested the theory in Washington DC in 1993. Crime levels in the city were lowered by about 24% during the experiment.


Invincible Defence Technology is based on the unifying effect of group meditation. But it is also important that we understand the numerous benefits of meditation for the individual, including the reduction of stress. Studies published in medical journals and described in publications like Psychology Today have proven that the Transcendental Meditation technique delivers the following benefits:

More than 6 Million people practice Transcendental Meditation worldwide. This form of meditation is so popular that companies like General Motors™ let their employees meditate once in the morning and once in the afternoon. This practice is becoming more prevalent in many American and British schools. In the USA especially, organisations like the David Lynch Foundation are encouraging TM.

It would seem that the only criticism leveled against TM is that it is based on Buddhism. However, TM does not lead to conversion to Buddhism, but merely provides the benefits described above. TM's origins stem from the ancient Vedic Tradition, which pre-dates Buddhism. No person practicing TM is going to suddenly become a Buddhist. It should also be noted that other religions like Sufism and even Christianity (prayer) apply meditation in some form.