"Nick asked us explicitly for a list of things we want to get done, which is reflected in the resolve section."

"A small group of Los Angeles Unified School District (LAUSD) stakeholders gathered last month in the District's West Valley offices. The meeting was billed as a focus group to gather input on the rating system for schools within the district but had not been publicly advertised. Instead, invitations had gone out through Board Member Nick Melvoin's mailing list. A mole on this list had forwarded the invitation to various public school activists which allowed them to see firsthand how the system had been constructed.

After viewing a beta version of the "School Performance Framework", it became clear why the organizers had tried to carefully control access to the focus group. While this system had been sold as a way to provide parents with data so that they could make informed choices about where to send their children to school, the proposed website did not emphasize raw information. Instead, it editorialized data by weighing factors the district had decided were important and then turned the final result into a Yelp-like score. Even worse, this score penalized schools whose results cannot be measured by test scores or data points. Schools will, therefore, be dissuaded from devoting resources to quality special education or other types of programs that will not boost the school's rating and, therefore, attract students.

Just as these series of focus groups were wrapping up, Michael Kohlhaas dot org released confidential emails between the California Charter School Association (CCSA) and some of their member schools that showed the real reason behind Melvoin's efforts. The Charter school industry wanted to "create another pathway for access to facilities.'' If Melvoin set up a system "by which all public schools in District facilities"[would] be evaluated on an ongoing basis to determine whether high levels of student learning are occurring ", these evaluations could then be used for facility allocations. By controlling how this data was presented, they could create a narrative that these schools were "failing" and reduce the number of facilities available to public schools.

Undeterred by the exposure of his collusion with the charter school industry, Melvoin is still pushing for the implementation of his plan. It is fine to "get comfortable talking about [performance] results ", but this information must be free of manipulation so that parents can determine how a school will meet the specific needs of their child. A Yelp style rating like the one used in the "School Performance Framework" does not inform parents about the strength of a school's community or how the school provides services to children with special education needs or English learners. It does, however, make it easier to give away facilities to privately operated schools that are not subject to proper oversight.

As crafted by Nick Melvoin and the CCSA, the "School Performance Framework" is fatally flawed and needs to be abandoned. Freed from the influence of a charter industry with ulterior motives, perhaps the LAUSD can devise a system that actually benefits public school parents. 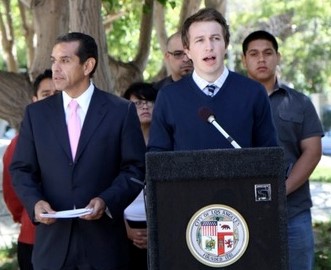 Antonio Villaraigosa and Melvoin
(Image by NickMelvoin.com)   Details   DMCA
Carl Petersen is a parent, advocate for students with special education needs, elected member of the Northridge East Neighborhood Council and was a Green Party candidate in LAUSD's District 2 School Board race. During the campaign, he was endorsed by the Network for Public Education (NPE) Action and Dr. Diane Ravitch called him a "strong supporter of public schools." His past blogs can be found at www.ChangeTheLAUSD.com . Opinions are his own.

Related Topic(s): Public Education, Add Tags
Add to My Group(s)
Go To Commenting
The views expressed herein are the sole responsibility of the author and do not necessarily reflect those of this website or its editors.