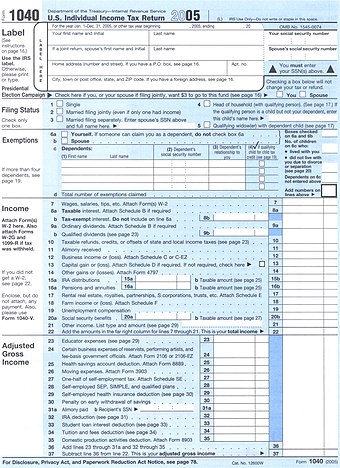 On March 12, the New York Federal Reserve announced a $1.5 trillion injection of money into the US financial system. Three days later, it cut its benchmark interest rate to zero and announced it would be buying at least $500 billion in government bonds and another $200 billion in mortgage securities.

The Fed is returning to a policy of "Quantitative Easing" in response to the COVID-19 panic. The idea behind these moves is that throwing money at the banks and the government will "stimulate" the economy by keeping credit easy for consumers and business borrowers.

I have a better idea.

For Fiscal Year 2018 (the year your last tax return covered), the US government only collected $1.6 trillion in individual income tax.

The projected amount for Fiscal Year 2019 is probably more than that, but not a great deal more, and almost certainly not as much as the Fed is already planning to throw into the mix.

If the US government is serious about "stimulus," it should announce that instead of accepting tax returns this year, the IRS will immediately (no waiting for April 15, no questions asked) cut and mail refund checks for every dollar of income tax it collected in Fiscal Year 2019.

Instead of the Fed magically creating a bunch of new money out of thin air and giving it to banks and the government, just give Americans our own money back.

We'll take that money to stores and buy things with it (that's "actual economic demand"), which will stimulate the economy a whole lot more, and a whole lot faster, than the Fed's magic money sitting in bank balances waiting to be loaned out (that's "prospective economic supply").

Yes, my proposal would result in an even bigger federal budget deficit this year than usual, adding more to the government's debt. But that was going to be the case even before the coronavirus. And both major American political parties have made it clear -- in action even when they don't admit it -- that they don't believe deficits matter.

If the COVID-19 panic is the economic equivalent of a heart attack, and that's pretty much what it is, the Fed's response amounts to slapping the patient's face and urging it to wake up while praying loudly and fervently.

Actually putting people's tax money back in their pockets would be the equivalent of a direct adrenaline injection to the patient's heart.

Related Topic(s): Corona Virus Coronavirus Covid-19; Federal Reserve System; Income Taxes; Stimulus, Add Tags
Add to My Group(s)
Go To Commenting
The views expressed herein are the sole responsibility of the author and do not necessarily reflect those of this website or its editors.

(You can only use the social login buttons before entering a comment.)
5 people are discussing this page, with 11 comments