Leftists should tread carefully with liberals who fight some forms of hate but ignore Israeli nationalist groups' role in the far right. People must ask themselves, "is it okay to be against racism, except when it is directed at Palestinians and Arabs." 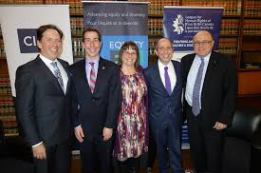 How could a prominent opponent of racism and hate ally with B'nai Brith?

A recent Ontario Federation of Labour supplement in the Toronto Star prominently profiled Barbara Perry. The Director of the Centre on Hate, Bias and Extremism at the University of Ontario Institute of Technology has been quoted repeatedly in Rabble, This and other leftist outlets.

While Perry has challenged some elements of the far right, she has also aligned with groups that stoke anti-Muslim, anti-Palestinian and anti-left sentiment. In May Perry spoke alongside Anthony Housefather at an event dubbed "a dialogue on online hate". The vicious anti-Palestinian MP boasted the Justin Trudeau government voted against a greater share of UN resolutions upholding Palestinian rights than Stephen Harper's Conservatives. Housefather regularly attends events put on by the Jewish National Fund, which is the only explicitly racist registered Canadian charity.

The Perry/Housefather event was cosponsored by B'nai Brith and the Centre for Israel and Jewish Affairs. These two groups have done as much as any organization in the country to stoke anti-Muslim sentiment.

In a bid to deter organizations from associating with the Palestinian cause or opposing Israeli belligerence in the Middle East, CIJA constantly targets Arab and Muslim community representatives, papers, organizations, etc. CIJA also regularly hypes "Islamic terror" and openly aligned with the xenophobic backlash against the term "Islamophobia in bill M-103, which called for collecting data on hate crimes and studying the issue of "eliminating systemic racism and religious discrimination including Islamophobia." In a BuzzFeed article titled "Zionist Groups in Canada Are Jumping On The 'Creeping Sharia' Bandwagon" Steven Zhou detailed CIJA, B'nai Brith and other pro-Israel groups backlash to M-103 and "how Muslim Canadians define Islamophobia."

B'nai Brith is a more aggressive hatemonger. Their bid to derail the Liberal party candidacy of Imam Hassan Guilet, who delivered a powerful sermon at the memorial for the Que'bec City mosque attack, riled up anti-Muslim commentary. Last October B'nai Brith sponsored an event in Vancouver with Ben Shapiro a former Breitbart News editor. Shapiro has said the "Palestinian Arab population is rotten to the core", "Arabs like to bomb crap and live in open sewage" and Islam is an "ideological representation of third worldism " and poverty." Reportedly, the Quebec City mosque killer visited Shapiro's Twitter account 93 times in the month before his attack.

Beyond aligning with B'nai Brith and CIJA, Perry has taken up their slur against some of the most active antiracists in the country. The Toronto Observer noted that Perry "agrees that the far-left can be just as guilty of hatred towards Jewish people" as the far right. The December story quoted her saying, "I think a lot of anti-Semitism on the far-left is rooted in anti-Zionism and hatred towards Israel."

Labeling opposition to the most aggressive ongoing European colonial movement a form of prejudice is outrageous. It is also absurd to equate the far left with the far right.

In a Canadian Dimension interview last year Perry basically refused to answer a question about the Jewish Defence League and other Israeli nationalist groups' role in the far right. I couldn't find any criticism she'd leveled against the JDL or B'nai Brith so I asked Perry if she could point me to it. She failed to respond.

Leftists should tread carefully with liberals who fight some forms of hate but ignore Israeli nationalist groups' role in the far right. People must ask themselves, "is it okay to be against racism, except when it is directed at Palestinians and Arabs."

Related Topic(s): Hate Groups; Islamophobia; Muslim, Add Tags
Add to My Group(s)
Go To Commenting
The views expressed herein are the sole responsibility of the author and do not necessarily reflect those of this website or its editors.